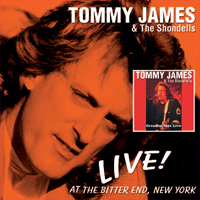 TOMMY JAMES in 1995 returned to his adopted home of New York’s Greenwich Village for a one night stand of which most musicians dream, a date with the famous Bitter End stage and it’s brick wall backdrop. In addition he reunited with his band The Shondells.

His audience is already in his corner and playing to a packed venue when the opening bass notes of “Draggin The Line” snake through the club, an answering roar echoes back.

The Hits just keep on coming, one after the other. Don’t forget “Crimson And Clover” and a drink of “Sweet Cherry Wine” and here comes “Mony Mony”

All too soon The Shondells are taking their bows centre stage. Tommy offers thanks to all

If there's a certain air of nostalgia about the '60s, some of the artists from that era can blow it to pieces and rip it up on stage. And that's exactly what the former SHONDELLS did with his new band in 1995 when he crossed the States to a city he loves dearly and played a one-night-only gig at one of the NYY's premiere clubs. The veteran builds an excitement and engagement with the soulful mid-tempo groove of "Draggin' The Line" only to shed the glitz some minutes later with a calypso-tickled "Say I Am (What I Am)" that, for all its easy roll, pounds quite heavily. There's a coherent flow from "Sugar On Sunday" into "Gettin' Together", both too sweet, yet prompting the punters to clap, which is all a fan and an artist alike need, and a non-stop emotional exchange is preserved so well on this swirl of a record. The more it spins, the higher one's spirit kicks. www.dmme.net Here Mr. James and company obviously played out of pure passion and love...creating an unforgettable experience for everyone involved...hopefully one day Tommy will be recognised as one of the greatest pop singer/songwriters of all time...because he truly is. babysue Much of this album is of the easier going variety, but great songs are great songs and I have to say that this is a disc that not only do I enjoy, but one that my whole family from my daughters to my in-laws enjoy, showing that truly great song writing is timeless - a word that describes much of the songs and performances on this excellent live album. Fireworks magazine The good people as Angel Air have released a string of interesting Tommy James re-issues during the past few months, but this infectious live set is far and away the most appealing offering that they've been involved with to date. Kevin Bryan (Hucknall Dispatch, Kidderminster Shuttle) Threatening on paper to capture less of a career-defining moment and more like the sounds of barrels being scraped, it proves testimonial to a timeless tunesmith once Tommy James gets onstage...As rendered by the maturing man himself at NY's intimate Bitter End, the '60s pop standards and psychedelic cuts make the audience scream like schoolgirls despite the years, and make obvious what inspired so many later greats. vivelerock