THE STORYS Town Beyond The Trees 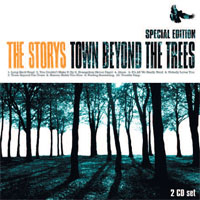 THE STORYS are a 6 piece 70’s west coast influenced country rock band from South Wales who formed in the spring of 2003. With 4 singersongwriters their sound is both fragile and intense underpinned by a dark lyrical edge. The band can turn from tender county tinged ballad one minute to an as wide as the ocean stomp the next-in the same category as classic harmony vocals bands such as Fleetwood Mac, The Eagles, Crosby Stills & Nash and The Beatles, all of whom had multiple singers.

‘Town Beyond Trees’ was released last year and is now repackaged with a BONUS second disc of live tracks including 4 tracks from their first much acclaimed self titled album from 2006.

...on a second disc you get the much lauded Live EP - Part 1, a 38 minute treat, previously only available at gigs...The sound is big and in your face and cements the band's reputation as a major live act.

If soothing vocal harmonies is your thing and gently driving guitars in an Eagles sort of way then The Storys are for you...Class act...and a classy album.

Influenced by the breezy, West Coast, harmony strewn pop sound of the '70s and artists like The Eagles, CSN and others...

The band has a sound that lies somewhere between Mr Big and The Eagles- there are beautiful vocal harmonies and soulful guitar a-plenty. The album itself includes highlights such as opening track 'Long Hard Road”, the heartfelt 'You Couldn't Make It Up”, 'Feeling Something”, 'Heaven Holds You Now” and 'Trouble Deep”, with its haunting harmonies.

The live disc features 8 tracks, including 5 that were not on the original album. This disc highlights the band's abilities to recreate their studio sound on the stage. It is a shame that there is not a live version of 'Long Hard Road”, but that does not detract from the CD.

Fans of Bon Jovi, Mr Big, Thunder, The Eagles- and of a good song in general, should enjoy this album.

I can find absolutely no fault with this stunning debut album. If you love music that is replete with gorgeous vocal harmonies, multi-layered textures, that places the emphasis squarely on the often neglected art of songwriting, then look no further because The Storys have exactly what you need, and then some.

...a slick and assured set that conveys the grit in the pearl with catchy, crooning ballads interspersed with choppy West Coast rock...