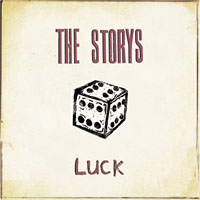 THE STORYS were formed in 2003 and their 70′s West Coast flavoured songs have seen them travel the globe, release two critically acclaimed albums, appear in a film, play scores of headline gigs and support the great and good: VAN MORRISON,SANTANA,KATIE MELUA, CELINE DION and SIR ELTON JOHN to namedrop but a few. The band has a large and devoted following in the UK and as far afield as Holland, Germany and the USA.

Quite uniquely the band features four singer songwriters who all take lead vocals on different songs and count amongst their inspirations vocal harmony bands such as The Eagles, Crosby Stills, Nash and Young and The Beatles.

‘Luck’ has been recorded over the past 6 months and could be the swansong of this much loved band as they intend to take a break after playing an emotional farewell gig at The Grand Theatre, Swansea, Wales (sold out) on June 19th 2010.

Lead singer Steve Balsamo said ‘ We’ve had a great six years together and have memories that will be with us for the rest of our lives. However, we all think the time is right to try something new. We all have our own projects to take forward and we’re eager to support each other. We look forward to giving our fans a fantastic final live show’ The farewell gig will leave room for a postscript to a partnership that has enjoyed considerable commercial and critical success.

‘Luck’ oozes the quality, charm and vocal harmonies that the band has become synonymous with. A killer album by any assessment

'Luck' continues the band's West Coast sound and as I said of last album 'Town Beyond The Trees' , fans of Bon Jovi, Mr Big, The Eagles - and of a good song in general, are gonna love this CD. There is an almost summery feel to the album and at is one of those CDs that you can leave on repeat and listen to over and over. 5/5

...with the blues never too far and the harmonies always tight, it's all bitter-sweet...

One of the significant strengths of The Storys has always been their flair for crafting hook laden songs that feature a plethora of sweeping vocal harmonies to fully complement the distinct vocal talents of lead singer Steve Balsamo...

...one gorgeous track after another

This is an album full of catchy, well performed songs that fans of the genre will lap up.

...another assured and polished essay in sweet 70s Americana a la Eagles, CSN & Y and that ilk...this swansong is their strongest offering yet.

A melodic gem of the highest order...