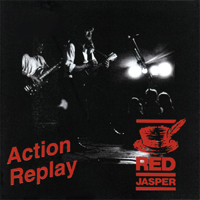 In early 1992 RED JASPER having released the previous year “Sting In The Tale” the band decided to record a live album to maintain momentum and also to get onto tape their much lauded live performances.

The band put together a live set that included old favourites and new material showcasing the even more progressive direction the band would take. The album was recorded on 26th January 1992 at The Fleece & Firkin, Bristol, England

The album was really well received with one review from 1992 “this shows what The Jaspers are like in a live environment. What is, is powerful, dynamic, tight and a progressive force to be reckoned with”

...the juxtaposition of painful imagery and supple delivery in "Soldier's Vision" hits the hardest, and "Contended Man" is the most elegant, its acoustic flow, though taut, makes a nice contrast to the tension of "Go For It" with its guitar bellicosity smoothed by a flute swirl.

But "Crawling Into Work" comes on hectic, a working class rock 'n' roll with a reggae bit reeking of Strummerville, while "Second Coming" and "Magpie" from "Sting In The Tale" gets flattened and rather less impressive than on the album, the latter's vocal pack notwithstanding.

Still, when another unreleased song, "Cool To Be Crazy", is unfurled to round off the show the madness receives its method, and the titular action begs for a repetition indeed. ***2/3

Action Replay is an excellent introduction to the reasonably unique prog infested, politically angry and folk tinged music of this band.

Action Replay is a live set recorded at the beginning of 1992 and so called as the late 1991 show planned yielded an unusable recording. The recording here is good but edited strangely - the tracks seem jump or fade one to another with little crowd or banter between. Still, the music is solid and tight, the prog mixing folk prog (Jethro Tull) through Crimson, Hawkwind and Genesis to Marillion. The delivery is hard and punchy, with some changes of influence, it's a decent set that captures the live sound and catalogue well. And the tin whistles and guest keyboards add an extra dimension. The lead guitar is, at times, blistering too.

Joe Geesin - Get Ready to ROCK!