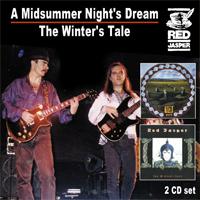 Over a two year period RED JASPER recorded the two albums coupled together for this release. “A Midsummer Night’s Dream” was recorded in 1993 and “The Winter’s Tale” in 1994 at Broadoak Studios in Hampshire, England. To promote the releases the band started to tour Europe including playing support to FISH. Their crowning European moment was headlining The Aurora Borealis Festival in Tilburg, Holland during 1994.

Perhaps, in the end the concept has worn thin, and one record in this vein would have sufficed. Yet it's impossible not to admire such an undertaking in the shallow climate of '90s. The Bard would have liked it. ***** / ***

Fish era Marillion shows up as a very strong influence, although the ever present folk themes continue via the usage of mandolin, whistles and bodhran...a strange and unusual mix of traditional English music, 80's neo-prog and stinging aggression, Red Jasper were a band slightly out of their time, but nonetheless enjoyable for being so...