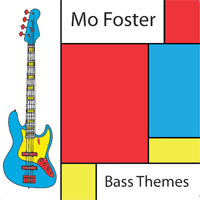 MO FOSTER is one of the most prolific session musicians within the music business in the UK. He has played on a staggering 350 albums and has rubbed shoulders with the good and the great. His style has embraced from jazz to rock to pop.

Back in 1988 he released his first solo album ‘Bel Assis’ and now releases his sixth solo album made up of production music he recorded between 1983 and 2009.

The tracks are perfect for easy listening or great in the car stereo while driving along the motorway.

For all their diversity, the pieces present a unified, integral front stricken with lyricism and showing master's supple touch be it in the faux big band jive of "Slink" or an Oriental shimmer of "Afternoon In Kyoto". Mo's accompanied by the equally virtuoso friends who know how to shape their flight to his vision, so Ray Russell chooses to be cosmic on the fusion of "Alone In New York City" and twangy on "Steam Driven", while Tony Hymas sprinkles the pavement with golden piano in "Goodbye Old Friend".

Still, it when the bass take a solo that the drift becomes most impressive like in the blues of "Jerry's Monet Bridge", the tango of "All Night Stake Out" or the cinematic "Staring Into The Abyss" where the depth is fathomed with low-end sonics. And then there's that rumble in "Good Cop, Bad Cop" and a shade of "Gimme Some Lovin'" urgency in the funky "Stomp", whereas humor slips into the breezy "South Coast Samba". Background music doesn't come more clever and enjoyable than this. ****/5

Mo Foster has played on over 350 albums, and is one of the UK's most prolific session musicians., and new album 'Bass Themes' brings together 30 of his production pieces recorded between 1983 and 2009...Mo Foster is a talented musician and this album will no doubt appeal to hard core fans...

Foster's sixth solo album Bass Themes, released by Angel Air Records, is an ingenious collection of production music that was originally recorded and commissioned between 1983-2009...

Bass Themes has been constructed in such a way that it touches upon a lot of different musical themes and emotions, so there's pretty much something for every mood. I can give you thirty different reasons why Mo Foster has been such a prolific and in demand session musician over the years, and you can find them all right here on Bass Themes.

Mo is joined by a stellar line-up of musicians including Ray Russell, Mark Isham, Tony Hymas and Ralph Salmins...Many tracks are simply too good for the library music tag...