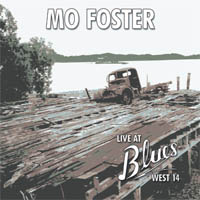 Mo Foster said “Musicians tend to loosen up in a club setting: away from the pressures of the studio or the concert platform they feel generally more relaxed, new ideas are tried, and they feel free to re-interpret old favourites”

“Live At Blues West 14” is proof of how correct that statement is. Most of the tracks on this album were recorded live in small clubs in the 90’s and the majority were recorded at Blues West 14, a small basement club in Kensington, London Classic Jazz / Fusion / Rock performed by masters of their profession.

Renowned musician Foster recorded these tracks during the 90s at the Blues West 14 Club and other similar small clubs, getting that intimate sound. Playing bass, guitar and keyboards (not all at the same time I must add) he is accompanied by Ray Russell, Gary Husband and a host of others.

The music is a gentle and easy mix of blues and jazz, the sort of music you'd listen to over dinner, where it fits in well.

Nothing too taxing, it's hard to just listen to this CD, it’s excellent for what it is and the musicianship can't be faulted, but great background music. 3/5

...this was an exercise in Mo getting some of his friends together to perform some light improvised jazz...Mo has a deftness of touch, particularly on a fretless bass...

...for the most part this album is a percolating collection of funk grooves, tender ballads and smooth jazz tunes. What's nice about this recording is the live ambience really shines through...

Another high-calibre outing for bass king Mo and his usual hardy band of super-skilled session friends...great music to play and to listen to it, just relax and let it float

Lovely fretless bass, timeless piano, sweet saxophone - the tracks meander soothingly...Do yourself a favour and chill out for an hour.

Beginning with its uptempo bass and guitar riffs, "The Importance Of Being Invoiced" is pure jazz-rock fusion, and its deft, energetic playing elicits vigorous applause in the intimate setting; the clever title refers to the working musician's difficulty getting paid. "Hot Buttered Cats" has a silky jazz/R&B feel, dynamically building off Foster's bass guitar lines. Foster earns songwriting credits on 10 compositions, including "Oh No," a challenging jazz piece that moves through several variations, and "Tradewinds," a catchy tune brightened by the Caribbean percussion background.

...displays a rare breadth and imagination in both the choice of material and the skill in which it is delivered...the atmospheric jazz fills the air and carries you away to a better place...Class throughout.