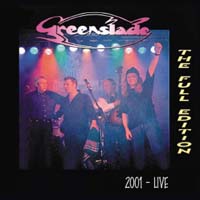 “When I was fifty, my wife had arranged a surprise birthday party for me and invited all the members of both Colosseum and Greenslade,” Dave explains. “By the end of the night we had decided to reform Colosseum and we did a big reunion tour. But I found myself signing loads of Greenslade albums and people were asking when that band was going to reform. So I thought well, why not?”

Although original drummer Andrew McCullough had effectively retired from music (now owning a Greek yacht charter company), and Dave Lawson was otherwise engaged in writing movie scores, Tony Reeves re-joined Dave Greenslade in the heart of the reformed band. A new drummer Chris Cozens was recruited for a new studio album, with John Young (ex-Asia) handling keyboards and vocals. John Trotter was added to the line-up, replacing Cozens for the live dates.
“This time around I’ve found a fantastic singer in John Young,” enthuses Dave. “The feel of the band has moved on again, as, with no disrespect to the other guys, I didn’t want to get stuck in the seventies.”

Particularly pleasing for the band was the fact that the newer material seamlessly mixed in with the older, landmark songs when performed live as Dave explains. “A lot of people who didn’t know the band couldn’t tell which pieces had been written in the seventies. This was because we had a fresh approach to playing the old stuff, such as ‘Feathered Friends’, and it all blended together well. Plus I don’t use Mellotrons that kept going out of tune and they were notorious. As soon as it got hot on stage you would have to re-tune it every ten minutes!”

Recorded in 2001, this CD captures one of this countries finest exponents of a more cerebral rock approach once again enchanting the crowds. And with a new studio album set to be recorded next year, the story of Greenslade is one that is set to continue for some time yet…

It was a splendid evening that took many of the audience back to a time when 'music was music'...

...There’s more prog-minded magic in store this month, as Greenslade bounce back from almost 30 years in exile, with Live 2001 – The Full Edition (Angel Air). Recorded on February 10 2001, when Greenslade appeared at a Classic Rock Society gig in Rotherham, England, the album reunites founder Dave Greenslade with just one former colleague, bassist Tony Reeves. But with sterling performances from new vocalist John Young and drummer John Trotter, Live 2001 captures the band’s entire set that night – 12 songs that recall some of the original group’s best loved numbers, at the same time as looking forward with a handful of fresh compositions carved exquisitely in traditional Greenslade form. A new Greenslade album is apparently in the works – if Live 2001 is anything to judge by, it should be a winner.

...Tracks are taken from throughout the band's career...there is definitely an audience of proggers that will want this CD