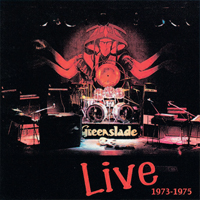 GREENSLADE are a much loved (and missed) progressive band who in 2012 will celebrate their 40 year formation with possibly a return to live performances. The band made its live debut at The Marquee, London in late 1972. Dave Greenslade and Tony Reeves had been original members of COLOSSEUM. They were joined by Dave Lawson who had been in The ALAN BOWN SET and Andrew McCulloch from KING CRIMSON.

To remind us what a great live band they were we release the only available live performances from the classic years of 1973 to 1975.The first 4 tracks of this live album were recorded just after the release of “Greenslade” and the 1975 tracks were recorded after the band’s third album “Spyglass Guest” and the two versions of “Sundance” bear witness to the changes as the band had gained experience and strength touring (the first version contains the original concept however)

...even in this rarest of phenomenon, Greenslade remain a unique proposition 40 years on.

The classically inspired 'Joie De Vivre' is one of their more optimistic pieces, encompassing varying changes of mood and tempo and sounding clear and crisp throughout. Given the age of the source material the quality here is very good with each instrument being much defined.

Greenslade's unusual no-guitar-but-two-lots-of-keyboards line-up is heard in great form across a running time of of just over an hour...The music recalls the unit's powerful combination, made up of keyboards alchemist Dave Greenslade and bassist Tony Reeves (they'd been together in Colosseum), Dave Lawson (vocals and additional keyboards, previously with the Alan Bown Set), and Andrew McCulloch (drums, latterly with King Crimson)

...the quality of this live recording is very good, bearing in mind we're talking live recordings from the mid-70s here! Not just a must for Greenslade fans but everyone who calls themselves prog-rock fans!

With their studio output newly reissued, this live offering is a timely and complementary perspective.

...an excellent insight into a band that arguably were way ahead of their time and which blazed a trail that many keyboard led progressive acts have followed. This album is an excellent introduction to the world of Greenslade.

Their dedicated following will love this opportunity to relive those heady days of mind-expanding prog rock gigs.

A fascinating live set from Angel Air, showcasing the only available live recordings from Greenslade's creative heyday in the early seventies.

This CD provides an introduction to the band as a whole, providing a selection of superb Mellotron keyboard sequences alongside stretches of brilliant Minimoog progressions. New prog fans will find Greenslade a tight band, musically, without the often debilitating self indulgence yet offering a series of multifaceted ideas that blend into often intricate conglomerates of ideas that stand repeated listening.