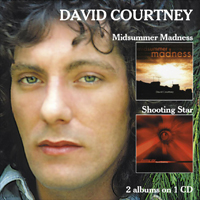 DAVID COURTNEY has, through a long and successful career, achieved that elusive smash hit record that many generations of songwriters strive to achieve. HIT songs such as “One Man Band”, ” The Show Must Go On”, “Giving It All Away” to name a few

By 1975 he took time out to pursue his solo career, releasing his debut album “First Day” which caused a few ripples in the UK but charted in the USA. Seeking to maintain the momentum of that success he travelled to Honky Chateau Studios, France (where the studio had attracted David Bowie to Elton John to Pink Floyd to Cat Stevens) and assembled an amazing cast of musicians (who collectively performed as ARGENT) and recorded “Midsummer Madness” and on returning to the UK the album was mixed by legendary Beatles engineer Geoff Emmerick. David on playback was not comfortable it was the right album to follow “First Day” and he took the difficult decision to mothball it. With hindsight he had produced a classic Prog Rock album which is now released for the first time 35 years later.

The bonus album “Shooting Star” was recorded in 1980 when David was living at 3361 Cold Water Canyon, Los Angeles a property later made famous by Eddie Van Halen (who bought the house from David) and renamed it 5051 studios. David and Mike Love from The Beach Boys became friends and Mike wanted to take David’s new album “Shooting Star” and turn it exclusively into the new Beach Boys album. David’s response “No”! Once again he put the album “back in the box” but 33 years later it now sees the light of day.

...'Los Dias Del Sol' ('The Days Of The Sun') suggests exactly that: warm, sunny, with a hint of Latin America. It's also a rather short instrumental. But mainly it's short. Like sunny spells in Great Britain!

The ethereal, haunting quality of 'The Easy Way Out' turns Courtney's most famous piece into a timeless classic – beautifully performed with a moody and melancholy piano for support. Pass me the hanky please!

Closing number 'Save The Encores' is a blend of classic rock, some harder rock, a bit of jazz, a bit of this, a bit of that… Well, make up your own mind. But my oh my is it skilfully executed.

...'Goodbye Home' is a number I warm to. The song tells the story of a trip 'round the universe and unexplored galaxies, while the musical arrangement thankfully remains more grounded and isn't spoiled by an overpowering electro sound. There's a proper melody to it, actually!

Things get all cosmic and distorted again on 'Mind Radio', before taking on considerable more organic forms with 'Pure Emotion'. I mean, we're talking a proper rock song here, complete with groove and nice riff work by John Verity. Whoa, beam me up, Scotty!

...1980's Shooting Star, fuelled by Courtney's passion for UFOlogy, is a welcome-to-the-world-of-tomorrow riot of frosty Radiophonic Orchestra synths and vocoders - impossible to hear without picturing Hazel O'Connor's Breaking Glass face. The vocal cadences of The Boys In A Dream perhaps suggest why Mike Love was sufficiently enthused by the album to ask if The Beach Boys could adopt it wholesale as their next LP: Courtney refused. Dig those Joe Meek oscillations on the title track.

...the members of Argent (minus Rod Argent himself) operating as Courtney's highly-impressive backing band...

It could have been much sweeter if David agreed to Mike Love's proposition to turn all of the "Star" songs into a BEACH BOYS record, yet that might ruin its own good vibrations, and now it's a memorial to the author's integrity.