DAVID COURTNEY The Show Must Go On 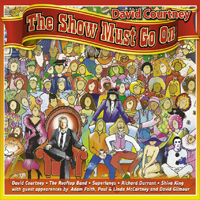 DAVID COURTNEY is an internationally acclaimed songwriter and record producer having over the past 35 years achieved Platinum, Gold and Silver discs representing the millions of records he has sold worldwide as well as receiving ASCAP awards and a Grammy nomination.

He discovered Leo Sayer in the early 70′s and together they wrote the classics such as “One Man Band” and “Giving It All Away” for Roger Daltrey, he co wrote “The Show Must Go On” which started Leo’s solo career as well as writing for DOLLAR “Shooting Star” Now for the first time we hear the man himself performing his songs

..."The Show Must Go On" obviously refers to the ever-evolving music and the song which is now resident in Australia that Leo Sayer became so famous, but also is the perfect title for this package of fun, with sometimes moving melodies of yesteryear. Who dares say that this is corny music...

...the feeling of eclecticism prevails and pulls the whole down while the individual pieces are good. A fitting reflection of any man's life. ***1/3