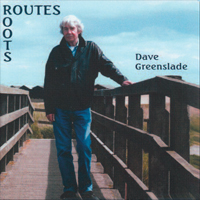 Most musicians dream of creating and playing in one commercially successful band. Dave Greenslade had not one but two. He is still in COLOSSEUM and created one of the first prog rock bands GREENSLADE.

Dave is currently playing a 22 date European tour with Colosseum, completing a new album with the band and has plans to reform Greenslade in 2012 to celebrate their 40th anniversary.

“Routes/Roots” is Dave’s new album that highlights a keyboard virtuoso’s talents with touches of prog rock to even jazz.

...the major surprise comes just when the maestro makes his entry with 'Routes' dissolving his piano jive in a big band sound - a one-man orchestra for there's no other players on the record - and then goes for the synth-led fusion, all filled with emotion.

With elements of classical, jazz, prog rock and other musical influences in the mix, it rewards repeated listening. 'Routes/Roots' has echoes of both his own eponymous band and of Colosseum.

...there are enough excellent moments, not least on the delicious 'Conversations', to keep fans happy.

...this is very plainly a record made for the love of music alone. An exercise in deft tinkling of the ivories that covers a wide range of musical styles from robust pseudo-classical through to light jazz and on to airy instrumental pop-rock, there is plenty here that reaffirms Greenslade's compositional and technical abilities.

...it should certainly appeal to anyone who has ever been captivated by Dave's mildly cerebral brand of music-making in the past.

...as second keyboard player and sometimes vocalist Dave Lawson adds even more grandeur to proceedings. Vocally Lawson is far more assured on this second recording and that maturity also become more obvious throughout the whole band when they perform 'Sundance'.

Keyboard king Dave takes us on a musical journey that reflects his career in jazz influenced progressive rock.