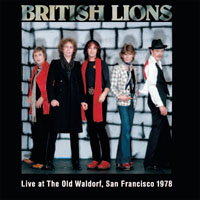 Fronted by charismatic lead singer JOHN FIDDLER who had changed his image and style from his laid back MEDICINE HEAD persona to that “suiting a new wave rock band” the bands management decided USA was right for the band and they supported the likes of BLUE OYSTER CULT and UFO before headlining themselves.

This live recording never before released from Old Waldorf, San Francisco captures the bands talent and energy. Shortly after this gig they hot footed back to the UK to record what became their last album Trouble With Women” which at the time had under whelmed the “suits”and by the end of 1978 British Lions were no more.

This excellent Angel Air archive release brings a 1978 radio broadcast from San Francisco back into your consciousness to give you a heaping dose of hard-driving, rock 'n' roll swagger that classic rock fans will be eager to sink their teeth into.

...captures the band's talent and energy...

It's good to hear a professional recording of this great band in such good quality...

... the band barrel through first album highlights propelled by Fisher's rampant keyboards, Major's Beck-charged leads and one of the greatest rhythm sections in rock 'n' roll...

...a no-nonsense British rock band ...with enough raw texture combined with just enough playing and production gloss to make it worthwhile on real stereo systems of the quality to which TNT-audio readers aspire

...not only captures a band that sound hungry and totally convincing, but illustrates just how strong the post Hoople era was for these musicians...the British Lions were truly an enigmatic live force to be reckoned with.

The band crammed a great deal of musical activity into their relatively brief existence and this hitherto unreleased live CD captures them at something approaching their energised best...