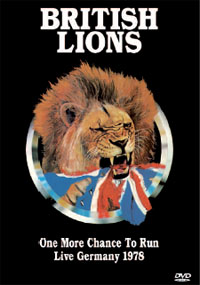 UK , European and USA tours took place over the next couple of years and a groundbreaking first album was released to much critical acclaim ‘British Lions’ SJPCD065

...their high energy rock tinged with a fair amount of boogie won many admirers...this DVD...shows a band full of vitality and taking greater pleasure in their performance...There are also several extended interviews with band members as they talk over the history of the band.

...it's astonishing, an energetic roar that reminds us just how many great songs British Lions had salted away. The title track, in particular, is a stone cold John Fiddler classic, and the bonus cuts allow us another chance to experience it, as an unplugged Fiddler runs through a five song mini-set that begins with the same song.

There's also a clutch of band interviews lined up at the end of the disc, to put the entire British Lions story into excellent perspective.

...the cream of their high octane repertoire is captured in this live DVD, which boasts five 'unplugged' songs from a solo Fiddler as a bonus