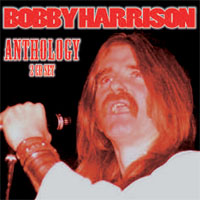 BOBBY HARRISON first taste of pop fame was as a member of GOLDEN APPLES OF THE SUN who released a single on the now infamous Immediate label in 1965. However it was a drummer with legendary band PROCUL HARUM that Bobby achieved worldwide fame with the hits ‘Whiter Shade Of Pale’ and ‘Homburg’.

A change of management for Procol Harum left Bobby feeling deeply uncomfortable with the new team and after a financial deal was brokered Bobby left with the old Manager and formed FREEDOM who recorded between 1968 and 1972 five critically acclaimed albums with Bobby on lead vocals.

Following the demise of Freedom Bobby recorded a solo album ‘Funkist’ which scored on the USA Billboard Chart. Early 1973 Bobby looked to form a band again and teamed up with MICKY MOODY and they formed SNAFU who recorded three critically acclaimed albums before grinding to a halt.

Taking a new direction Bobby formed NOBODYS BUSINESS with JOE JAMMER and TONY STEVENS (Foghat) and was on the brink of success in Japan when the band’s manager was tragically killed in a car crash which was the catalyst for the band calling it a day.

Bobby’s next adventure was fronting an all black band called NIAGRARA which led to a session being recorded for TOMMY VANCE. This then led to Bobby going to Iceland where he recorded an Icelandic Top 20 album ‘Solid Silver’ with the guys from MEZZOFORTE playing on Bobby’s album

Thirty tracks here that will hopefully make the world more aware of Bobby's substantial contributions to the world of music. Plenty of cool rockin' stuff that's perfect for spring driving...