FREEDOM – Through The Years 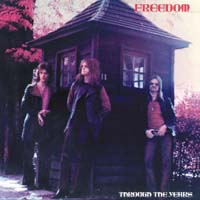 FREEDOM was formed in the summer of 1967 after BOBBY HARRISON had left PROCOL HARUM because of “internal differences”. The fact that he played on their number 1 single “Whiter Shade Of Pale” was of no consequence the other band members wanted changes.

Two albums were released by Freedom in the 60’s “Black On White” and “Freedom At Last”. Fast forward to 1970 and Freedom’s heavy blues rock style was going down a storm in both USA and UK. In 1971 “Through The Years” was released to much critical acclaim. Now remastered-play loud!

This hard rock / blues trio recorded several albums in the late 60s and early 70, not all released in the UK at the time, but often to critical acclaim. One of their last albums, this was released in 1971 and features some strong numbers. **1/2

They mix the blues in with more straightforward hard rock...another interesting nugget from Angel Air and one that is worth hearing

...follows the tried and tested Freedom formula of riff laden blues based rock...

Some listeners will be transported to headbanging heaven...