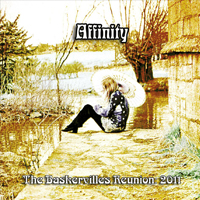 It was 46 years ago that The Baskervilles, the precursors to AFFINITY, last performed live. However at the 50th birthday celebrations at The University Of Sussex, England in 2011 it was decided to reform the band for one more time.

The band was a combination of original players from various incarnations of The Baskervilles and Affinity. They also managed to recruit the wonderful RAY RUSSELL on lead guitar and keyboard virtuosi GARY HUSBAND. LINDA HOYLE flew in from Canada to perform again with her iconic band.

The timeless nature of the numbers seemed to be enjoyed by all and, with the venue filled with bobbing bodies, the University once again rocked to the sound of Affinity.

The public surely loved it, and it would be silly not to preserve such significant reunion for posterity, so as a historic document this CD is as good as it gets. ***

A reunion concert for a group of musicians who last appeared on stage as the Baskervilles some 46 years ago. The Baskervilles morphed into Affinity, hence the band's name on the CD. The night featured amongst others Mo Foster, Ray Russell, Brian Davis and Glyn James along with guest musicians including Linda Hoyle and Gary Husband.

Musically it is like a top draw covers band as they run through a series of 50's and 60's standards from amongst others the Beatles, the Byrds, the Stones and a moving version of Simon & Garfunkel's 'Sound Of Silence'. Each song ends with polite applause which reminds you it is live but I am sure on the night the crowd had a good time.

By no means essential an interesting one for collectors and fans of the many and varied works from Mo Foster, Ray Russell and Gary Husband. ***

Jason Ritchie - Get Ready to ROCK!

Affinity, known as Jazz-Rock-Fusionists, came together from the bands Ice and Baskervilles.

In 2011 the singers John Carter, Glyn James and Linda Hoyle joined in with Session stars Mo Foster, Ray Russell and Gary Husband, the latter as guest on the piano.

They celebrated at the University Of Sussex - after 46 years of Baskervilles break - they played pop and rock music from the early days, starting with Buddy Holly and Eddie Cochran, then the Beatles, the Byrds and the Zombies.

Songs like the Stones' 'Satisfaction' or the Ray-Charles-Stomper 'Hallelujah I Love Her So' are very pleasantly presented focussing on the melody without the attempt to be overly wild.

It is an excellent choice of Evergreens, perfectly suitable for everybody to join in singing them.

Here then is the reunion of 7 buddies to play some good music the old way, without recourse to modern technology, and the result is a delight throughout...

...21 numbers played with conviction, good humour and without any pretention; good versions of Satisfaction, Yesterday and Mr. Tambourine Man, to name some of the better known.