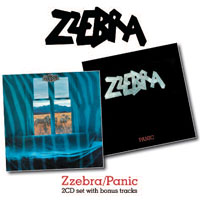 ZZEBRA were at the forefront of mid 70’s Progressive/Afro/Jazz Rock/Funk and were not surprisingly created by an amalgamation of two highly rated bands ( Dave Quincy from IF and Loughty Amao from OSIBISA) Add to that Liam Genockey, Steve Byrd and John McCoy who later played together in GILLAN and you had a driving creative band.

Both CDs are great recordings of technically excellent and enjoyably played funky fusion, immaculately transferred to CD... TNT Audio ( www.tnt-audio.com ) (February 2010) ...a driving, funky amalgam with much rhythmic persistence and a full-blooded and exciting big-band sound... The Beat Magazine (March 2010) ...a band with huge character, crammed full of life, energy, and musicianship...an intoxicating mixture of jazz, rock, funk and heavier rock, all of which is enhanced by rich Afro flavours underpinned by a powerfully addictive rhythm section... Ryan Sparks, Sea of Tranquility (March 2010) ...combined seamless musicianship - glowing pulses of electric piano and dreamy thermals of soprano sax - with an evangelical Tower of Power-style adherence to The Groove... Record Collector (March 2010) All in all, a solid re-release - and certainly one to easily locate in your alphabetical CD collection. Classic Rock Society (April 2010) ...jazzy arrangements, and fiery guitar and saxophone solos akin to a jazzy version of Santana...7/10 www.maelstrom.nu (April 2010)