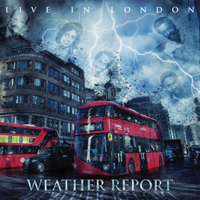 No band in the history of modern jazz has left a more transformative legacy than Weather Report. During their lifetime (1971-1986) they elevated this uniquely American art form to an unprecedented level of critical and commercial acclaim.

Their command of the jazz idiom – instrumental mastery, compositional innovation, improvisational genius – took them on a voyage ‘round the world to people and places far beyond the New York nightspots and Europe concert halls that had long-served as the measure of a musician’s success.

By drawing from such a worldly panorama, Weather Report became an international phenomenon, a “lingua franca” all its own, their fans as enthusiastic and supportive as those associated with rock and pop stars.

Recorded Live In London in the ’80s.

Originally recorded for Radio broadcast, but now available on CD.