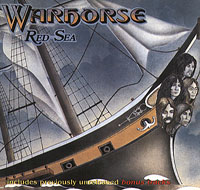 For their second album Warhorse featured guitarist Peter Parks who had joined them prior to a European tour in 1971. The band’s contract with Phonogram/Vertigo ended, however, shortly after the release of “Red Sea”. Two of the band, Ashley Holt and Barney James(who had replaced Mac Poole), left to join Rick Wakeman and this in effect was the end of Warhorse.

In 1979 Nick Simper made a comeback with the band Fandango.

“Red Sea” is an equal companion to the first album: redolent of the era of progressive rock but with a heavy edge and some great organ work.

Red Sea, Warhorse's second album, would appear in early 1972, and shows few of the wounds that its rushed completion must have inflicted...The band's songwriting was, if anything, even tighter than it had been the first time around. Again the Deep Purple comparisons are valid, but again, too, Warhorse's own unique identity is stamped across the record... ...for anybody looking to broaden their Metal horizons a little with a classy vintage act whose name isn't splashed across a few million denim jackets, Warhorse and Red Sea are ready for you... Dave Thompson, "Goldmine" 26.2.99 It is a bit more progressive, in stylistic terms, than its predecessor but retains every ounce of heaviness. For the best evidence of this just take a listen to "Back In Time" which includes yet another one of Ashley Holt's patented pre-metal screams. "On The Record" Music America magazine In many ways the music is just as innovative and forward looking as other bands with a similar approach from that era, such as Purple and Black sabbath...it is actually very pleasant listening and would appeal to fans who still enjoy those bands' music from that era... Bernard Law, Wondrous Stories (November 1999) This medium hard rock UK quintet...reminds of a late sixties raw American style rare Earth/Guess Who/Band/Lemon Pipers via the soulful lead vocals but also with splashes of thee early '70s Uk progressive hard rock scene a.k.a Deep Purple/Jethro Tull/Caravan via the backing...certainly worthy of investigation... there is a certain freshness here that other progressive classics of the time have lost...Highly recommended. Zabadak ...Nothing fancy, just no-nonsense guitar-driven numbers...bolsted by a string of bonus tracks. Hartlepool Mail (February 2000) …an ultimate hard rock group…with exciting, vibrating instrumental-approach with lots of keyboards and full-hearted vocals. Psychedelic, No.9 (December 2001) Warhorse's music is very close to the music that Deep Purple created…with guitar-and-organ-driven heavy rock. Greger Rinnqvist If you're a fan of Deep Purple, Black Sabbath or Uriah Heep, you need to hear Warhorse. This reissue is a gift to all fans of early hard rock, done English Style. Done right www.classicrockmusicblog.com (February 2009)