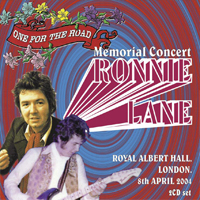 At The ROYAL ALBERT HALL, LONDON on 8th April 2004 after some 15 months of planning with PAUL WELLER, RONNIE WOOD, PETE TOWNSHEND, STEVE ELLIS, MIDGE URE, OCEAN COLOUR SCENE amongst them artists assembled to perform to a sell-out venue and to pay tribute to a man who cowrote many Mod anthems such as “Itchycoo Park, All Or Nothing, Here Comes The Nice, My Mind’s Eye” to name just a few.

RONNIE LANE was the creative heart of two of Rock n Rolls quintessentially English groups, firstly during the 60’s with The SMALL FACES then during the 70;s with The FACES. After the split of the Faces he then formed SLIM CHANCE and toured the UK in a giant circus tent as well as working in the studio with ERIC CLAPTON, PETE TOWNSHEND and RONNIE WOOD.

5,500 fans looked on in awe at The RAH as the superb evening’s entertainment ended with “All Or Nothing” featuring a surprise appearance by CHRIS FARLOWE on lead vocals.

Gone but not forgotten, Ronnie Lane's music is still a reason to be cheerful. ****1/2

...Rock luminaries such as Ronnie Wood, Pete Townshend and Paul Weller joined forces to revisit some of the timeless ditties that Ronnie helped to create during his time with The Faces and Small Faces as well as some charmingly bucolic excerpts from his subsequent solo career led by 'The Poacher', 'Harvest Home' and Lane's infectious 1973 hit, 'How Come'.

Some of the main highlights include riveting performances by Pete Townsend on the catchy acoustically flavoured 'Stone' and on the rousing 'Heart To Hang On To'. Other notables include the Rod Stewart classic 'Maggie May', lovingly reimagined by Jones Gang but staying true to the song's classic roots and the massive hit 'Tin Soldier', also redone by the Jones Gang. Listening to these live versions it is clear the player's hearts were in the right place this night in April, 2004 at the Royal Albert Hall.

The booklet includes a short essay by John Hellier, shedding light on the evening and delving briefly into Ronnie Lane's history.

Every so often I have a feeling I will play this disc if only to keep the memory of Ronnie Lane alive and well. He truly deserves at least that much.