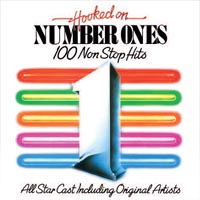 This is 1984 and renowned songwriter and producer GEOFF MORROW assembles a who’s who of the Pop world to record their versions of pop classics and makes the top echelons of the UK carts as “Mixes” are all the rage.

Now remastered with informative sleeve notes on the story behind the project.

When the focus is on the '60s or memories are cast even further back, like "Lovesick Blues" with Mike Berry's yodel, the artists involved apply their best interpretative skills, but there's not much zest in the latter stuff, so thankfully, the '80s output is boiled down to the opener "Uptown Girl", "Relax" and closer "Karma Chameleon" that slip out and into the "Hooked On Number 1's" theme delivered by the creme de la creme of session singers including Sue and Sunny, Tony Burrows and Vicki Brown. Her other half, Joe, shines on "Bad Moon Rising" yet fails to blow life into "Imagine" as marred by a homogenous rhythm track as is "Michelle" in which Lonnie Donegan's brilliantly repaying The Fabs all their admiration; the skiffle master's keening voice feels perfectly suited for this tune but, surprisingly, can't hold "Sailing" above the water he treads in his own "Puttin' On The Style". By the same token, MUNGO JERRY are inimitable when it comes to "In The Summertime", although they deliver "A Whiter Shade Of Pale" and "Sweets For My Sweets" just as infectiously. ...the real star of the show is an unknown vocalist, Bogdan Kominowski whose attack lends a new quality to "Maggie May", whereas GERRY & THE PACEMAKERS prefer to stay in the comfort zone of "How Do You Do It" - unlike THE FORTUNES updating "If You Leave Me Now" or MUD who throw away their saccharine for zippy harmonies of "Oh Boy" before exorcising all the sarcasm from "Out Of Time". But that's the emotion which gets in the way of dancing, a goal this album hits in style. *** www.dmme.net (March 2012) It's fascinating to hear a familiar voice on a chorus or verse of a song that's not usually associated with that particular voice. The more unexpected examples include 'Michelle' and 'Sailing', performed by Lonnie Donegan; 'San Francisco (Be Sure To Wear Some Flowers In Your Hair)' by Craig Douglas... The Beat (March 2012) ...Featuring an all star cast, including original artists, and produced in 1984 by Geoff Morrow, the 100 track CD features snippets of songs everyone knows and loves and breaks it all down into four medleys. On hand are much revered artists including members of The Fortunes, Mungo Jerry, Marmalade, Lonnie Donegan, Joe Brown, Helen Shapiro and more. As documented on previously released Angel Air titles - including CDs from Ammo and Butterscotch - Morrow's work in the pop field is never less than exemplary. Touching on a hundred different tracks, it's all a bit karaoke, but nevertheless, Hooked On Number Ones makes for 65 minutes of nonstop listening fun. MWE3.COM (April 2012)