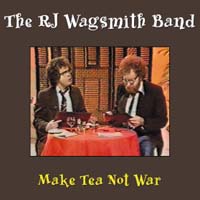 Mike has appeared in loads of sitcoms, notably as Eric in “Brush Strokes”. He has also written for “The Brittas Empire”, “Birds Of A Feather”, “A Prince Among Men” and many more. Mike did most of the voices while Mo played most of the musical instruments and, with the help of guest musicians and actors, the Wagsmiths produced a string of novelty singles including “Chalk Dust” which they credited to The BRAT and was a memorable UK Top 20 Hit during 1982 with ROGER KITTER posing as The Brat.

Amongst the memorable TV performances was “The Papadum Song” which struck a chord with anyone (i.e. everyone) who had ever had a few drinks and gone out for an Indian meal. For a giggle Mo and Mike sang the song on BLUE PETER, though Mo had to hand back his badge when he inadvertently sang “f***” instead of “duck”
Finally TERRY WOGAN was momentarily silenced when actress Leni Harper serenaded him on his own BBC TV show with “Terry Wogan” The RJ Wagsmith Band -Anything for a laugh

The RJ Wagsmith band comprised legendary bassist Mo Foster and comedy actor/writer Mike Walling, best known as Eric in the sitcom Brush Strokes and this album collects together the string of novelty/comedy singles they released.

The album is a compilation of material from 1981 to 1991...it is harmless, relatively inoffensive and quite childish.

...The sleeve warns that 'this CD contains material of a flatulent and silly nature,' and it does not lie.

Although it's not your conventional sort of album it's great fun.