THE REAL THING Live At The Liverpool Philharmonic 2013 DVD 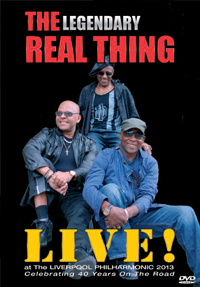 THE REAL THING are a UK soul band formed in the 70’s who, in addition to achieving a string of UK hits, also charted internationally with their song “You To Me Are Everything” which reached No 1 (1976) in the UK and Top 30 Billboard in USA.The follow up track “Can’t Get By Without You” reached number 2 in the UK chart (1976) and over the next decade they achieved eight UK hits including “Can You Feel The Force” (1978).

MOJO writer/journalist Paul Du Noyer credited them with restoring “Liverpool’s musical reputation in the 1970s with their success” and by sales in the ’70s they were the most successful black rock/soul act in the UK.

Performing to a packed out Liverpool Philharmonic in 2013 the band celebrated their achievements over the past 40 years in style.