THE PIRATES Land Of The Blind 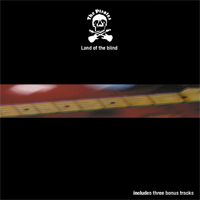 MICK GREEN had a pedigree that stretched back as long as British Rock and R&B had been around and since 1962 he was performing as The PIRATES. In the 80′s and 90′s Mick played with amongst others BRYAN FERRY, VAN MORRISON and PAUL McCARTNEY.

“Land Of The Blind” was recorded in 1996 and the album has been remastered with three live bonus tracks recorded in Finland during the same year. Mick died in 2010.

Crank up loud and enjoy a classic Pirates album.

...at the time of 'Land Of The Blind', originally released in 1996, they comprised the great Mick Green (guitar/vocals), Romek Parol (drums) and BJ Anders (bass/vocals). There's plenty of Green's guitar playing to enjoy...there are three exciting live bonus tracks with Green soloing strikingly on 'Linda Lou'.

First bonus track 'Rock Bottom' (I think the title refers to the aforementioned 'Sex On Legs' ... stays in familiar rock territory, while 'I Can Tell' and 'Lindy' thunder across hard and sweaty. Here, the beast is finally unleashed, and with killer solos in abundance.

As I said, a mixed bag of booty ... Worth checking out, if only for nostalgia's sake.

Uplifting rock/pop recorded by The Pirates way back in 1996. This band was driven by the songwriting skills of Mick Green who formed the band back in the 1960s. Joining Green on these recordings are Romer Parol (drums) and B. J. Anders (bass, vocals). Land of the Blind features smart, punchy, guitar-driven rock/pop tunes that could have been hugely popular around the world. Most of the tracks on this album sound like potential hits.

Land of the Blind is a good album for anyone who loves classic rock/rhythm and blues delivered by the Rolling Stones, Bruce Springsteen, or Ian Hunter. A great introduction to The Pirates. But as I always say, "Better to have heard than to have been missed entirely".

Check this album out as a good representative sample of music that used to rule the radio airwaves.