THE KORGIS By Appointment 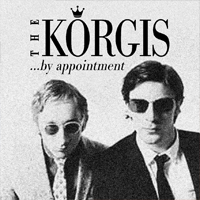 First there was STACKRIDGE formed by Andy Davis and James Warren and a few other eccentric Bristol chums.

Stackridge lasted six years before the band officially threw in the towel. Andy and James continued to write together and by 1979 they released their debut as The KORGIS and then immediately had a UK Top 20 hit with “If I Had You” followed by a worldwide smash hit “Everybody’s Got To Learn Sometime” in 1980.

The massive unexpected success of “Everybody’s Got To Learn Sometime” lead to friction in the band and The Korgis were no more soon after. Andy has toured the world twice as keyboard player with TEARS FOR FEARS and more recently as keyboard player for GOLDFRAPP. James has recorded solo albums as well as reforming Stackridge with Andy.

2015 and The Korgis have now reformed and will be playing at a theatre near you.

Some of the tracks here are originals, some 1990's re-recordings, others presented in alternative 'unplugged' versions re-recorded in 2005. Ultimately the provenance doesn't really matter, it's all about their underrated songwriting artistry, as the covering of their material by Beck, Rod Steward, Erasure, Tracey Ullman and The Dream Academy among others testifies.

'Everybody's Got To Learn Sometime' might have been THE KORGIS' only hit, yet 'All The Love In The World' - in acoustic version here, just like 'Young 'n' Russian,' a hard-hitting artifact from the Iron Curtain era - is every bit as tremulous and uplifting, whereas the world music rhythmic patterns add to the tight transparency of 'This World's For Everyone.' And if the Rachmaninoff strain in a slide-kissed 'If I Had You' betrays the band's sophistication, the reggae flow of 'Lines' reveals their humorous side, although the synthetic layer under the Latinesque buzz in 'One Life' somewhat jars until it comes to an organ solo. Still, that's only a slight trade-off for this unique link between 10CC and THE BUGGLES so, with a few obscure tracks on display, the disc is as interesting a collection as it gets. ****

...By Appointment is a collection of some of the band's best songs as well as some unplugged performances. The best known hits are included ("If I Had You," "Everybody's Got To Learn Sometime") as well as lesser known songs that should have been hits ("Perfect Hostess," "If It's Alright With You Baby," "I Just Can't Help It"). Although Warren and Davis parted ways for many years, in the twenty-first century they decided to reform Stackridge (much to the delight of their fans) as well as The Korgis (who will be touring in 2015). When The Korgis hit the target, they really hit it dead center. Some of these tracks are just...THE BEST.

The newly reformed Korgis celebrate their return to the fray with the release of a typically tuneful package featuring re-recordings of the best of their repertoire from the late seventies and early eighties. The mildly eccentric Bristolian duo are obviously firm believers in the enduring power of a quirkily memorable melody and some fine examples of their distinctive songwriting style are gathered together here...