THE CONTRAST A Sinister Flick 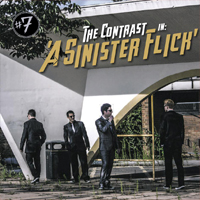 The CONTRAST is a Peterborough based band who admittedly is bigger “over there” than here. Not surprising really as they had previously been signed to USA based labels including Van Zandt’s own label Wicked Cool Records and have released six albums over the past decade.

For their seventh album they have signed to a UK based label and are embarking on a UK tour to promote the album culminating with a support slot at MOTT THE HOOPLE’S Manchester Apollo November 17th date as bassist OVEREND WATTS special guests.

“A Sinister Flick” is a stunning new album that shows clearly why this guitar driven power pop four piece can eloquently produce an album full of great melodies and short catchy songs. Quite simply The Contrast are a band that has unintentionally combined the best elements of different bands into something that is uniquely their own.

Skipping chirpily along with the album, I hear the Beatles-esque pop fest of Days of Wonder, the upbeat yet melancholic style, reminiscent of R.E.M, of Johnny the Torch, and the crunchy guitar sounds of Mr Snake. I feel that I've been treated to what I wouldn't describe as a concept or theme album, exactly, but a characterful, intelligent, humorous, credible album that was put together with thought and care by its creators.

A Sinister Flick is a good, uptempo rock/pop album by the foursome and will be promoted on their upcoming UK tour.

It is full of songs that are quirky, like Mr Antenna, and lively like Doctor Strange. The vocals from songwriter David Reid are very distinctive, similar in fact to a young Hugh Cornwell. The songs are full of uncomplicated arrangements with occasional strings from Kat Moore. They are also short and punchy, packing 16 songs into 52 minutes and they are all catchy.

Musically, guitars are to the fore, with the keyboards mainly in the background and the drums get a powerful outing on the title track - which again hints at a Stranglers influence. Could this band be the successors to the Meninblack, who are about to celebrate their 40th anniversary next year? Only time will tell, but in the meantime this is a good set of songs to get acquainted with The Contrast.

There's not a dud across the 16 songs spanning 50-plus minutes. If Paul Weller had formed REM then they might have sounded a bit like this. Tuneful pop hooks and cool lyrics abound, and it's all very stylish and accomplished.

...there actually isn't bad track in sight and the likes of "Stick Man", "Balloon Man" and "Heavens To Murgatroyd" have a nifty knack of insisting on being recalled for hours on end.

If you are looking for a modern-ish piece of retro that knows exactly what it is about and exactly why, then The Contrast are for you and A Sinister Flick is something you'll want to sit through time and again.

...the latest CD from U.K. pop-rockers The Contrast is one of the best albums of new music on Angel Air in a while. Formed by Glasgow, England born singer / songwriter / guitarist David Reid back in 1999, The Contrast have a number of albums and you can add in the 2013 Angel Air release of A Sinister Flick.

The CD cover art of A Sinister Flick is great, reflecting the mix of music inside which includes folk-rock, rock 'n' roll, surf, 1960's pop, psychedelic and more in the best spirit of The Kinks, The Who and very early Bowie. Backing Reid up in the studio is Richard Mackman (bass, vocals), Thorin Dixon (drums) and Kieran Wade (rhythm guitar, keys, vocals). With song titles like 'We Are The Monsters', 'Mr. Antenna' and 'Heavens To Murgatroyd', The Contrast creates a most memorable mix of colourful sounds on A Sinister Flick.

This is a very enjoyable bunch of pop/indie rock tunes, with opener 'We Are The Monsters' sounding like classic R.E.M. meets the Godfathers and one for the airwaves. 'Balloon Man' is one of those songs that wriggles into your consciousness and doesn't let go, plus love the Byrds approved guitar break midway through. Further 60's influence on the groovy 'There's Always A Chance' and on 'Stick Man' they sound a little like the Levellers. At sixteen songs you certainly get VFM.