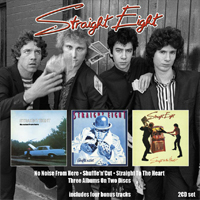 There are many bands whose history has been dogged by bad luck, missed opportunities, disastrous recording sessions and death. STRAIGHT EIGHT had all of these in abundance but still managed to release three critically acclaimed albums in the period 1978 to 1982 before calling it a day.

Formed in 1976 the band released in 1978 their debut single “Modern Times” on PETE TOWNSHEND’S independent label Eel Pie Records as a taster to their first album “No Noise From Here”.

After three decades Angel Air release all three original albums on CD with liner notes by legendary music journo Peter Makowski who was working for Pete Townshend at the time and was responsible for getting the band signed to his label, this triumvirate of releases features their now much sought after single “Spread It Around”, which was produced by Pete Townshend (who plays on it) and other rarities.

The band's first album (No Noise From Here) is a real rockin' kinda affair while the follow-up (Shuffle'n'Cut) finds them in a more power pop vein (similar to The Cars). While we kinda like the debut album best, in all honesty all three albums have their great moments. The second disc includes four bonus cuts, most importantly the hard-to-find single "Spread It Around." We love the packaging here...each disc looks like an eight ball (one red, one blue).

...if the power riffs of 'I Idolise You' chimed in more with American AOR of the day than UK's post-punk, 'Nicotine Boys' taps right into it – with gusto, while Boot Kingsman's bluesy licks spice up the organ-oiled 'Take It All Back' and 'Power Cut,' the latter - a Winter of Discontent snapshot - sitting in the heart of 1980's 'Shuffle 'n' Cut,' a rather different proposition. No 'duplication of yesterday' as stated in one of the pieces here, it starts with the bubbling 'I'm Sorry' baring the band's new pop agenda and takes 'On The Rebound' to the dancefloor in fine fashion, whereas 'I Can't Stop' are 'Satisfied' are channelling the CLASH sort of twang and vocal chops.

John Burns' sympathetic production, honed on prog, makes pieces like the anthemic 'Only You' or the elegant rocker 'Heartbreaker' sound modern even now...

Now, after three decades, their three albums are collected on two CDs, plus some bonus tracks. I must confess that I've never heard of this band and their songs are not familiar to me. It's American-inspired, melodic rock. The bonus tracks include 'Spread It Around', which was produced by Pete Townshend...