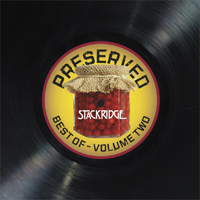 STACKRIDGE can claim many small but significant places in pop music history including opening at the very first Glastonbury Festival in 1971, playing on the same bill as ELTON JOHN, The BEACH BOYS and The EAGLES as well as being inspired by three disparate musical influences-The Beatles, Frank Zappa and The Incredible String Band.

Stackridge founders James Warren and Andy Davis even took a break from Stackridge in the late 70′s and early 80′s to form The KORGIS with whom they enjoyed worldwide success with “If I Had You” and “Everybody’s Got To Learn Sometime” before reforming Stackridge again in the 90′s.

JAMES WARREN and ANDY DAVIS have been back in the studio to compile this “Best Of-Volume Two” compilation from their Stackridge back catalogue using original tracks from the period 1971 to 2003.

This splendid anthology was assembled by Stackridge founder members James Warren and Andy Davis, drawing on more than three decades worth of exemplary music-making in the process. The gentle quirkiness which became Stackridge's trademark permeates choice offerings from the early seventies such as '32 West Mall', 'Teatime' and the single version of of 'Slark'...

...Sure, there was a break in their activities, and the bittersweet post-reunion gem "Something About The Beatles" sounds polished, more like Andy Davis and James Warren's other collective, THE KORGIS, rather than STACKRIDGE's original oeuvre, yet for all the variety on offer, the impression is of genuine continuity.

It draws a bridge to another latter-time track, the elegiac "Charles Louis Dance", from the fantastic dance of "Slark" from their debut, here in its single variant, less than third in length from the full one but still arresting, as is the acoustic lace of "Can Inspiration Save The Nation"...

..."Preserved", then, is a wrong choice of the title, and jam on the cover doesn't reflect this band's real nature. The STACKRIDGE music is still a vibrantly living creature - strange but adorable. ****

From the acoustic whimsy of 32 West Mall, from their 1970 debut, to the acoustic delicacy of The Final Bow, from 2002's LEMON, in between there's a wealth of inventiveness, grandeur and fine tunes that span almost every genre.

Whether it's the cut-down single version of the epic Slark, the imaginative 21st century tribute Something About The Beatles or the expansive instrumental God Speed The Plough (produced by Beatles mastermind George Martin) the music is gorgeous and shows how much the band needed the full-blooded reunion that brought us 2009's aptly-titled A VICTORY FOR COMMON SENSE, one of the finest albums of all time. ***

...Unlike most compilations, 'Preserved' doesn't shy away from including the shorter, quirkier Stackridge tracks, allowing highlights like '32 West Mall' and 'Can Inspiration Save The Nation' to catch your curiosity as they pass by.

Really that is just scratching the surface of the flavours and textures served up on this excellent introduction to a band that deserves far more recognition than they currently receive. However, what ties it all together are beautifully crafted songs that have obviously been created with great care and attention, making each and every one a journey well worth taking in its own rite.

Anyone not familiar with Stackridge will be pleasantly surprised by this varied and entertaining collection - and, yes, there is an occasional hint of the Korgis that they were to become for a period of time.