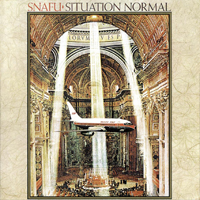 SNAFU returned to the UK in early 1974 from touring the world playing support to The DOOBIE BROTHERS and The EAGLES and went straight into the studio to record their second album ‘Situation Normal’.

The band explored a strong country rock route with MICKY MOODY getting more into playing slide guitar and BOBBY HARRISON producing sublime vocals with the band rhythm section a tight and soulful performance. Released in 1974 the band went on tour in USA supporting ELP and in Europe WAR to support the albums release.

A much sought after classic album.

This is the band's second album originally released back in 1974 and saw Pete Solley take more of the limelight, which as a result sees this album have a much more country rock leaning than the debut. That said, like the debut the band try a fair few musical avenues throughout the album including the folk meets country of 'Brown Eyed Beauty & the Blue Assed Fly' This is great musical fun with Pete Solley laying down some mean fiddle playing.

Micky Moody shows his classy slide playing on 'No Bitter Taste', a lovely blues rock stomper. For me it does drift a little on the extended jam of 'Playboy Blues'. Mind you 'Big Dog Lusty' is a corker, like the Eagles in their prime. Vocalist Bobby Harrison is the unsung star of Snafu as he has such a powerful and emotive vocal, quite why he never became more well known is a mystery.

It beggars belief that the album didn't do well, an unfortunate fact further soured by the decision to book SNAFU as the opening act for Emerson, Lake & Palmer during a US promo tour. Indeed, how could fans of Emerson & Co possibly relate to the musical offering of SNAFU? They couldn't, and sadly it spelled the beginning of the end for the band.

A couple of quite lengthy tracks save this one, which is probably less consistent but has greater highs than the debut.

...toe-tapping and Moody's guitars, otherwise unaccompanied, take 'Lock And Key' to a bluesy heaven, while 'No More', lazily driven by Terry Popple's bass and spiced up with Colin Gibson's percussion, shakes its wares the Philadelphia International-way.