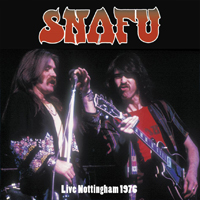 SNAFU were at the peak of their creative and live capabilities when they performed at the Refectory at Trent Polytechnic in 1976 with three ground breaking albums already released and their stock high amongst both fans and fellow musicians. However at the end of this tour a very young MICKY MOODY accepted David Coverdale’s offer to join his new band WHITESNAKE and his departure effectively bought about the end of SNAFU.

BOBBY HARRISON bought in Clem Clempson to fill the gap but says “It didn’t really work out. This concert is us at our best. I am very proud of the albums we released and how fondly today we are remembered”.

Situation Normal All Funked Up for a great gig!

This is US-influenced blues-rock all the way, the opening cover of the Allman Borther's 'Don't Keep Me Wondering' being followed by 'Long Gone', a self-penned sound-alike of Little Feat's 'Spanish Moon'...the musicianship is tighter than tight, abetted by a class rhythm section in Colin Gibson and Terry Popple...This would have been a short show had the six live tracks been its sum, so four very much heavier efforts from Harrison's later outfit Niagra round out the package.

This live recording from 1976 in Nottingham is a blessing with a group at the peak of their art, six titles of very good sound quality allowing us to relive the funky rock blues inspired by ALLMAN BROTHERS or LITTLE FEAT...Beginning the concert with 'Don't Keep Me Wondering' and we get to know this rather unique sound, mixing rock with funk and it's great. The husky voice of Bobby Harrison is up-front, there's no question these are top level musicians. The group is led by the guitar of Micky Moody that's like hot embers when combined with Tim Hinkley's crazy electric piano. The rhythm section is impeccable, not to mention the percussion by Bobby Harrison.

Snafu were nearing the end of their brief existence when this muscular performance was captured for posterity at Trent Polytechnic in January 1976. The outfit formed by one-time Procol Harum drummer Bobby Harrison had recorded three critically acclaimed albums by this stage but commercial success had largely eluded them and departure of slide guitarist Micky Moody for pastures new with Whitesnake effectively signalled the end of the road for Snafu's robust fusion of blues, funk and country rock. 'Highway', and the soulful 'Every Little Bit Hurts' are the best of the bunch.

...Freestyle blues and call-and-response are added to the heady mix for "Big Legged Woman" which the group never took to the studio to expand on the piece's fusion in a more disciplined way, leaving this version the testament to their ability to throw caution to the wind and cruise around the tune, but the cover of "Every Little Bit Hurts" is as soulful as it gets, without embellishments except for a filigree guitar figure on a solo...

...Rounding off the listening experience, in inferior sound quality, are four cuts from 1977 by Bobby's next band, the short-lived NIAGRA: a much more polished proposition, filled with vocal harmonies on "Crossfire" and smearing AOR all over the punchy "Cold Eyes" whose surface is punctured with a sharp riff. Far from SNAFU's rawness, these numbers only stress how special that quintet was - great while it lasted and coming alive now. 4/5 Stars.

Snafu's blues rock inspired the legendary bands Little Feat and The Allman Brothers. The American blues with slide guitar and a funky rhythm also reminds us of Grand Funk Railroad. At the intro of this live album you can already hear the honest, pure sound of the group. Raw unpolished singing by Bobby Harrison and funky guitar by Micky Moody with Tim Hinkley at the Hammond organ. Bobby's energy shatters his vocal cords, and Micky pulls excellent dirty sounds from his guitar. A few weeks later he switches from Snafu to David Coverdale's Whitesnake. This also meant the end of Snafu. The recordings of Live Nottingham 1976 are beautifully honest, as pure as it was at the time - no technical gadgets or tricks, no, the music came directly from the heart and soul!

If you're a Bobby Harrison, Micky Moody or SNAFU completist, then Live In Nottingham 1976 will prove a vital addition to your collection. For anyone else there's undoubtedly a great hard blues rock act here to be discovered...

Snafu were at the peak of their creative and live capabilities when they performed at the Refectory at Trent Polytechnic in 1976 with 3 albums already released and their stock high amongst both fans and fellow musicians...Tracks are 'Don't Keep Me Wondering', 'Long Gone', 'Big Legged Woman', 'Every Little Bit Hurts', 'Unsettled Dust', 'Highway', 'Crossfire', 'Victim Of Love', 'Cold Eyes' and 'Don't Be A Fool'.

It is a short set, only six songs, yet you get a good feel and sound of the band as they play blues rock set of covers and their own songs. Highlights include the slow blues burner 'Every Little Bit Counts' which highlights Bobby Harrison's emotive singing and the rocking 'Highway', where Micky Moody plays up a storm.