ROCOCO Run From The Wildfire 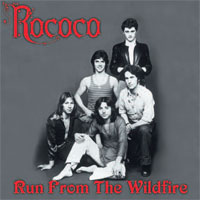 ROCOCO was one of London’s finest Prog Rock bands of the 70’s and were formed by a young musician ROY SHIPSTON who had been a trainee journalist at MELODY MAKER.

In 1972 he quit journalism and formed late 72 early 73 Rococo and immediately obtained a singles licensing deal with the now infamous DERAM Records who released ‘Ultrastar’ as the a side and ‘Wildfire’ as the B side which ironically became their most popular live track and for many years DJ Alan Freeman used the riff on his radio show.

The band broke attendance records headlining at The Marquee Club as well as playing support on UK tours to TEN YEARS AFTER, THIN LIZZY, SNAFU and CLIMAX BLUES BAND

All the tracks on this album were recorded during the 70’s and highlight how exciting and original prog rockers the band were.

Their songs are actually less indulgent and more melodic than many of their prog contemporaries...

...a nice reminder that between the prog and punk factions there were bands who could do both

Angel Air have really hit the ball out of the park with this excellent archive release...Fans of theatrical classic rock artists such as Queen, Elton John, Sweet and Mott The Hoople will not want to miss this one.

...five-piece purveyor of a fiddly fusion of tuneful glam, pop and prog back in 1971.

A melodic gem of the highest order...