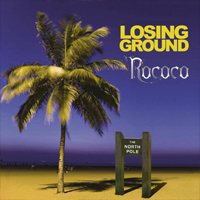 Formed in the 70’s as a progressive rock band the band having released two previous albums have now reformed for their third album which is now more rockier, jazzier and funkier than their previous offerings.

“Losing Ground” is an album that takes a walk on the dark side of desire which showcases the brilliance of original lead singer IAN RAINES with the raunchy edge and tension of new guitarist Tym Scopes and the sparkling performance of original member ROY SHIPSTON on keyboards.

...the piano-sprinkled chorus of 'Manhattan Horns' can rival any of the group's old-time songs, and the voices bear just the right dose of panache in the fusion flow of 'Blue Movie Star' that firmly sets the overall urban agenda. The pipes of Chris Thompson, drummer Clive Edwards' FILTHY McNASTY boss, carry the nocturnal weight into the 'City Life' glitterball, where original bassist Steve Carman guests, yet the tinseltown effervescence is served best in the 8-minute-long 'Motel Gypsy' which marries vaudeville to funk running from below 'Night Drivin'' and lets celestial organ take it all to the higher level.

Guitarist Tym Scopes must have had some fun on 'Cold Turkey' - lots of penetrating guitar solos and a stretch! Get up and shake that ass! We get a rather short instrumental with 'Air2Air' - at the same time we get to hear some nice bass work from James Fox.

A heavy keyboard sound (courtesy of Roy Shipston) dominates throughout 'Baby J' - it is a number that rolls on like a song from a musical production, which is debatably a good way to end an album.

If you want a prog album you just aren't going to get it with Losing Ground. What you will get is retro sounding mostly mid-tempo rock that is catchy, classy and just easy to listen to. For a melodic rock album this one is a keeper.