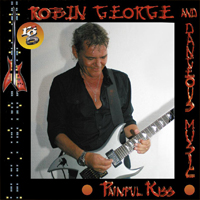 However what connects these legendary artists is that guitarist and singer songwriter ROBIN GEORGE has collaborated, recorded or written songs with each and every one.

“Painful Kiss” is an album of songs he has recorded with some of the most talented musicians you could hope to hear, yet forward thinking by presenting them in a way he always imagined they would sound. The result is a revealing, honest album positively dripping with passion, authenticity and as Robin says “many of these songs have an interesting history”.

The relative highlight is "Catarina" with a hook you can get used to. "The Rubicon" is a good pop song...

...It's not the first time for such an endeavor, what with the axeman taking to the mic on DAMAGE CONTROL's "Raw", but the result is intimate now, rather than heroic, on the likes of "Love Power And Peace" as the composer stresses a strength of a song itself, not only of its message. The anguished honesty of his delivery zooms out from the universal to personal in the fresh-fashioned title track - all sparse melange of sharp riffs, angular strum and Eastern weave - and, following a reference to angels, in an updated look at "Heaven" which is an epitome of an almost orchestral affection here. The vibrant reprise of "Oxygen" may seem to symbolize the insularity of Robin's today's approach, and not for nothing George, with a blues edge to most of the numbers, is boiling down the decisiveness of "The Rubicon" to his and Pete Haycock's rapport.

Still, there's a crisp funk thrown onto "Pride" after the guitarist has pushed Ruby Turner's wail to the back, while the infectious chorus and Mel Collins' sax make the heavy, if sensual, "Catarina" stand out, but "World" offers dry crunch that's gradually wetted with a slider to soften the writer's acidic critique of our current ways. That's why here's a lot of love in these grooves: because it is all we need, as painful as it may be. ****

Over the years Britain's Robin George has worked with an amazing array of great classic artists including Robert Plant, Glenn Hughes, Phil Lynott, David Byron, Roy Wood (!), John Wetton, and Pete Way. But he's also recorded an impressive number of solo albums that have caught the attention of many.

On Painful Kiss , George presents his own recordings of songs that were recorded previously or made famous by other musicians. In addition, the album presents three new tracks that were written specifically for this release. Our guess is that these tracks will become the definitive recordings of many of these songs. These cuts have a nice thick fat produced sound with plenty of overdubs that add additional zest. And of course those remarkable guitars remain the trademark of Robin's sound. Twelve nifty zippy cuts here including "Painful Kiss," "Lonesome Daze," "Pride," "Love, Power and Peace" and "Oxygen."

'The American Way' is where Charlie Morgan hits hard, despite few guitar interventions from Robin. It is However, my favourite track, surrounded by a bass groove. Another of my favourites is the bluesy 'Bluesong' where Robin demonstrates how successful it can be when he does not try to please at all costs, because when his guitar awakens, the music takes off...

Openers 'Painful Kiss' and 'Lonesome Daze' - both still poppy with a metal edge - kick-start things nicely, and nod stylistically back to 1985 and George's first solo album, albeit with a twenty-first century twist. 'The American Way' is a snappy little pup originally recorded with Glenn Hughes (this version unfortunately still lurks in the vaults, officially at least) and the coupling of 'Catarina', complete with sax solo from the legendary Mel Collins, and 'The Rubicon' is pretty much worth the price of the album alone: if your toes aren't tapping by this point in the album you'd best check you still have a pulse.

If you've never encountered the work of Robin George before, I've no hesitation in suggesting that Painful Kiss is a wonderful place to start. For those more acquainted with his impressive output, the chance to hear some old favourites alongside some newer numbers given the full Robin George treatment, will prove simply too good to pass up.