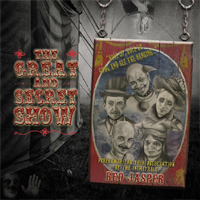 RED JASPER recorded their last album back in 1997 but following on from the bands entire back catalogue being rereleased on Angel Air in 2012 they have reformed and recorded a stunning and breath-taking new prog rock album.

Described by some reviewers as” a cross between Jethro Tull and Marillion” the band delivers their best recording to date whilst maintaining their music and song writing ability plus the fact that within each song they combine instruments and moods in a challenging and entertaining manner.

The band will be touring 2015 to support the release of the album.

This is a solid and entertaining release from Red Jasper, and the fact that the songs linger in the memory long after the CD has stopped spinning is a testimony to their quality. True, the music is not overly complex and the arrangements relatively fuss-free, but that only adds to the appeal.

The Great And Secret Show is an excellent symphonic prog album that completely came out of left field. Fans of melodic progressive rock should love this.

Their fans will be thrilled, beginners may want to review previous albums. One would expect a little more with the passage of time but it's still good material. Rating: 4/5

'Living The Life' picks up the joie de vivre theme, although there's a typical English guilt rolled into its theatrical charm which switches into a dream-chase, and living that dream might be this great and secret show each of us participates in. More so, it's the force behind the band's resurrection - not a misstep here. *****

As for the epic title song, yes, the circus macabre has come to town - with a promise to kill off the clown and with unique acts for everyone! Musically, the songs blow across various sonic realms and we're talking quite a vintage sound here, with echoes of Jethro Tull and Dutch prog-rockers Focus.

Feel free to enter - come and see the hanging, come and hear the music!

Strongly reminiscent of Solstice or a more folky, less scary Twelfth Night, Red Jasper utilise a combination of the expected neo tropes: soaring guitar solos, classic keyboard sounds, acoustic guitar and a gently affected, over-enunciated vocal delivery from frontman David Clifford. Slabs of Mellotron underpin the title track and the jauntily majestic An Hour Of Time, sultry sax adds colour to The Time Is Right and Robin Harrison's guitar wrings emotion from Ray Of Darkness...This is an excellent album for those who hanker after more innocent, less sonically polished times.