RED JASPER Sting In The Tale 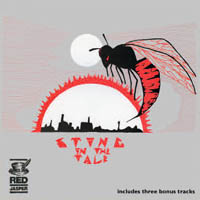 RED JASPER were formed in 1987 and quickly built a strong band following playing their own unique brand of Prog Rock live in UK and Europe.

Over a four week period in 1990 the band recorded their critically acclaimed album “Sting In The Tale” which is now remastered with three bonus tracks added including the tracks from their much sought after 12″ EP.

As one reviewer wrote when the album was originally released “Red Jasper’s strength is not only their musical and song-writing ability but the fact that within each song they combine instruments and moods in a constructive, challenging yet interesting manner” We could not have said it more eloquently.

Recorded in 1990 but set squarely in Thatcher's Britain of the previous decade, this folk prog five-piece nails its politics firmly to the mast of the Left, lambasting state authority and control, jingoism, corporate greed and corruption from every quarter. Founder and front man Davey Dodds' vocal stylings take getting used to, but a few listens in and it all starts to take shape. Unapologetically barbed, droll and razor-sharp lyrics are squeezed into phlegm-flecked shouting over sawing acoustics and supercharged sax while guest Fairport Ric Saunders lends nimble flourishes of violin, the effect a curious blend of Billy Bragg and Van der Graaf Generator (a parpingly-proggish 'Secret Society') by way of the Dropkick Murphys.

Three bonus tracks here reveal added polish in 'Pull that Thumb (Off The Top Of Your Head)' and 'Flagpole' while dramatic closer 'England's Green And Pleasant Land?' is a reflective even plaintive piece revealing a more rounded talent than initial impression would suggest. ****

Review by Peter Muir - Get Ready To ROCK!

In places, FAIRPORTS' Ric Sanders gives the results an air an authenticity with his fiddle's diddle, yet elsewhere, the sax-oiled "Company Director" posits its critique much seriously, revealing all the depth of JASPER's psyche, as does the funereal march of "Second Coming", sprinkled with mandolin and whistles.

Still, it's the EP track "England’s Green And Pleasant Land", one of the bonuses here, that provides the ensemble with an epic, while "Flagpole" is a "Sting In The Tale" in miniature. The bigger they get the better, though, and that's a blistering start of a rise. ****

..."Sting In The Tale" shows a 'Red Jasper' heard from the beginning of the group. Characteristic for the music from the early period was the coupling of rock to folk music. The drive has a harder sound than on later albums and is not representative of the group's later calmer sound - this is clearly a group who is looking to hear their own sound.

...Red Jasper would go on to bigger, better things (something that upcoming reissues 'A Midsummer Night's Dream' and 'The Winter's Tale' will attest) however 'Sting In The Tale' is still, for all its faults, a compelling debut album that illustrates great verve and skill.