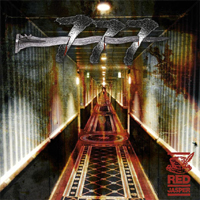 RED JASPER have ploughed their own particular Prog Rock furrow for nearly three decades. After a hiatus between 1998 and 2011 the band reformed with former RJ drummer David Clifford replacing Davey Dodds on lead vocals.

2016 sees the release of their seventh studio album “777”, which follows on from the critical and financial success of their first reformation album “The Great And Secret Show”. “777” carries on the themes from the Clive Barker inspired previous album, by further exploring human nature, religion and beliefs. The band have really hit their stride with “777”, generating challenging music that is certainly amongst their best.

Opening with the catchy up-tempo track called '7' there's nice keyboard-melodies and synth-washes (Lloyd George), supporting DC's lead vocal. 'She Waits' is a great head-nodding rocker featuring some splendid guitar work (Robin Harrison) and is cleverly arranged with some Purson-like psychedelic moments and should be a live favourite.

'Forth Of Fife' has lovely synth swathes and another highlight is 'The Gathering' with up-front keys, plus great bass and strong guitar work with a lovely Marillion-tinged instrumental mid-section...777 delivers well-balanced enjoyable end-to-end listens.

The band has almost completely abandoned the real folky elements in their music; no tin whistles, no mandolin, no traditional folk melodies. Instead you get catchy synth themes and poppy vocal melodies as on the opener 7, a real waltz on She Waits, and metal riffing in The Gathering. They produce very poppy choruses (Nothing to Believe) and re-work the leading theme of Forth of Fife in the next song (The Gathering) without gluing the songs together. There the strength of the vocal lines becomes very apparent. Clifford manages to sing the long lyric lines without any obvious strain, and makes these songs fluid and melodious....

Bonus track October and April is a cover of The Rasmus featuring Annette Olzon song, jointly sung by Clifford and his stunning musical, dancing and acting daughter Soheila. It is a rather cheesy and folky ballad, with acoustic guitar and spinet-like keys sounds that reminded me of the Dan Fogelberg/Emmylou Harris duet Only The Heart May Know on the Innocent Age album. Their voices blend together very well and the sober-but-effective arrangement makes this potential lamentable song a really nice one to listen to. I highly prefer it over the original. 8/10

Folk approaches have not entirely disappeared, but are now less frequent. This is perhaps most clear on the track "She Waits", which is really rocking - a beautiful piece. Among the highlights include the great opener "7" and the pop/prog "Reaching out" with its anthemic vocals and detailed synth solos. The soft synth number "Paradise Folly" is an excellent album closer.

...'Dragonfly' includes an introduction with acoustic guitar but the tone in general is again neo-prog. 'Paradise Folly' is like JETHRO TULL: a beautiful ballad on acoustic guitar, with romantic keyboards, a beautiful voice, loads of emotion and a Gilmouresque solo. 'October and April' is an unplugged bonus track with the addition of a female voice. I do not know if all this will please the old fans, but they will gain more fans, because RED JASPER took a serious facelift with this album.

777 is vintage prog-rock - it should have been recorded in 1974. Lloyd George's keyboards are the key sound that grounds the album, not with Wakemanesque flight of fancy - well, not much - but with solid swathes of sound. The bass and drums are equally solid with Harrison's guitars doing the rest. 'Reaching Out' is a prime example of the way the band works...there's a bonus track, a cover of 'October and April' from Finnish band The Rasmus to emphasise Red Jasper's credentials. If you like your rock music layered in pomp and circumstance, you'll love this.

...with "Reaching Out" bringing a brighter tone to proceedings and Robin Harrison's early Rothery inspired guitar styling taking hold, it's a genuine, classy highlight of this album. As with the band's precious release, lyrically the work of writer Clive Barker has inspired the exploration of human nature, religion and belief. Along with an intriguing album cover that evokes the most recent series of American Horror Story (Hotel), the imagery, both physical and mental is strong. When Red Jasper really hit their stride, they easily match that level of atmosphere.

The band's eagerly anticipated follow-up set mines a similar melodic vein as the five musicians explore the vagaries of the human condition via the refreshingly uncluttered delights of 'Forth Of Fife', '7' and 'Paradise Folly'.

The glossy anxiety of "7" introducing a new set of rules, now erstwhile long instrumental passages have left ample room for David Clifford's vocals that launch the heavy raga of "Blessed With Gold" on a deliciously high note, although sometimes words seem to twist the tunes into slightly repetitive patterns. As a result, the melody which unites "The Gathering" with "Forth Of Fife" could have outstayed its welcome and drown the "Firth of Forth / Firth Of Fifth" reference if not for the songs' additional turns and distinctly different arrangements. So where others would indulge in countless time signatures, RJ wrap the verses of "She Waits" in waltz and harden its choruses to rock riffs, while giving the despondency of "Nothing To Believe" an anthemic bounce.

Still, where Lloyd George's cosmic synthesizers make "Reaching Out" a typical art-rock ballad, "Paradise Folly" gets down to an acoustic, spiritual foundation of it all, something that's stressed on a bonus cover of THE RASMUS' "October And April" as DC and his daughter Soheila (whose solo album is long overdue) deliver a dramatic duet. There might always be seven reasons not to see it clear, but with "777" RJ clear this view in spectacular fashion. ****