RAY RUSSELL – Why Not Now 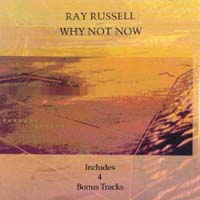 RAY RUSSELL started life playing in GEORGIE FAME & THE BLUE FAMES and over the decades with ROCK WORKSHOP, RMS and his solo albums he has released some of the “tastiest” jazz/rock albums ever.

“Why Not Now” was originally released in 1988 and Angel Air true to form has added four bonus tracks as well as remastered the whole album. Classic product from a Heritage Artist.

A gentle album, one that could almost be dismissed as being 'New Age', but that would be unfair as there is some beautiful music on here...

...arranged with meticulous attention to texture and featuring exquisite playing from musicians of the calibre of former Miles Davis aranger/keyboard player Gil Evans.

It's too intrusive and insistent to be ambient; too ethereal to be considered fusion by its more traditional definition; and too structured to be jazz...Why Not Now rests comfortably on the edge of all...Angel Air's series of Russell reissues is a welcome effort which, if there's any justice, ought to bring his name to broader visibility.

John Kelman All About Jazz (January 2005)

There are some busy synth harmonies and Russell's guitar is restrained, adding colour and texture rather than in-your-face pyrotechnics.

'Pour Me A Fish' sums up this approach with its sweeping synth harmonies and reflective guitar melody topped with breathy panpipe synth. Lovely.

'Blue Shoes - No Dance' and 'Lunday Island' pits Russell's plaintive acoustic against Hymas piano/synth whilst 'The Pan Piper' is more of an impressionistic piece. Four bonus tracks complete the proceedings, with 'Snow (A Passing Phase) recalling Jeff Beck in his 'Blow By Blow' period.

Altogether this is an album that will repay your attention. It will be worth checking those guitar polls in future, or even influencing them if you can. Russell deserves a slot.