RAY RUSSELL A Table Near The Band 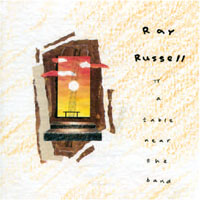 Ray is better known to the millions of viewers of TV programmes and films such at ‘Touch Of Frost’, ‘Bit Of A Do’ and Diamond Geezer’ as the composer of those programmes soundtracks.

…contains many of the trademarks that have made him a leading figure on the jazz rock scene.

The musicianship is as high calibre as one would expect, and the pieces shifting moods and styles keep listeners' attention riveted. A thoroughly enjoyable set.

The album is, well amazing to be honest, the last jazz album that made such an impression on me was Allan Holdsworth 'Sand'.

7 tracks of frankly amazing guitar work from a band that are obviously enjoying the moment and putting in a solid performance...