RACING CARS Bolt From The Blue 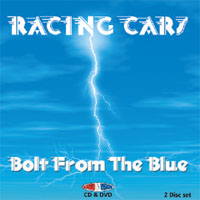 RACING CARS over the past couple of years have been touring the UK and last autumn released their new studio album ‘Second Wind’ to great commercial and critical success Back in 2000 they recorded the excellent ‘Bolt From The Blue’ album which was only released in their native Wales and Angel Air rectify that with its first UK commercial release as well as a bonus track their HIT SINGLE ‘They Shoot Horses Don’t They’ and a version of ‘Downtown Tonight’ recorded live at Ipswich during 2007.

...melodic, accessible, and particularly energetic when you consider the fact that these guys have been at it for three decades.

There's no outstanding tracks, they're all sunnily good…A rare thing of beauty in our warped reality

…very much a continuation of from all the Welsh band was doing in its prime, but with a harder, funkier edge that reminds of the time that has elapsed…an attractive package

…worthy of a more serious investigation…an exceptional adult rock album with soul and blues undertones…The CD comes with a bonus DVD…and shows the band in all their glory doing what they do best i.e. play live.

The good people at Angel Air should be commended for making this an enjoyable set available on CD for the first time, along with a bonus DVD…

The old sound is still there, updated a little too. Morty's vocals are both soft and gravelly (a nod at Rod Stewart), augmented well by some touches of slide guitar and country picking. If soft rock still has any relevance, here's the proof. Two bonuses here include "They Shoot Horses Don't They" and a 2007 live take on "Downtown Tonight".

Disc 2 is a DVD of the 2006 30th anniversary concert, catching the band on fine form and with some enthusiastic crowd support. Previously issued, it is bolstered by some bonuses, the 16 track live set being added to by some unplugged tracks, band interviews and interviews with Joe Elliot and Gary Pickford Hopkins.

Well packaged, some good melodies, if of limited appeal. ***