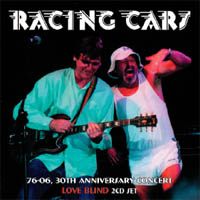 Most people’s introduction to their music came when the single ‘They Shoot Horses Don’t They’ hit the UK Top 20 in 1977. Now a 2CD set from Racing Cars.

CD 1 was recorded live on a wonderful summers evening during July 2006 to a sell out crowd at Pontardawe Arts centre, in South Wales where the concert was also filmed for a DVD release.

CD2 is the first time this album from 1981 has ever been released on CD along with a newly recorded bonus track.

Famed for their 1977 hit 'They Shoot Horses Don't They', the band continued for several years and retained a level of popularity, as this 2006 concert on disc 1 shows. Solid rock, if a little poppy, Morty's vocals a little husky. Recorded in south Wales, tracks from several albums get aired to much appreciation. 'Down By The River' is a little funky, good soulful 70s rock fare. Their hit goes down a storm too, and the recording quality is excellent.

The second disc is the album Love Blind, from 1981, and is released for the first time on CD...

A good package (as you'd expect from Angel Air), good music, this will please fans no end. ***

A welcome return...for an underappreciated set, and a chance for fans to reacquaint themselves with a band that raced off far too soon.

A welcome return...for an underappreciated set, and a chance for fans to reacquaint themselves with a band that raced off far too soon.

This is no moonlighting performance but rather a highly professional one...Racing Cars sounds like a well oiled hits machine...

Love Blind...has a funky edge and, once again, relies on fine songcraft. 8/10

With a rocky grit hidden in Gareth 'Morty' Mortimer's voice, the band still please the fans and casual listeners alike but don't dwell on the past, and half of the show, including two opening numbers, consists of the songs recorded this side of Millenium.

The band's soulful brand of pub rock has withstood the test of time remarkably well and the inclusion of 'Love Blind' gives Racing Cars fans a heaven sent opportunity to fill a yawning void in their CD collections.

It's all a bluesy, poppy, rocky blend of solidly good songs played by some of the finest of British musicians.

...it's nice to hear their honed music pleasing the faithful...

...the live show is exhilarating...

With no filler material, "Second Wind", ready to fill the FM waves, is better than anyone could expect. And if anthemic "The Heart Of You" feels too cheesy against the rest, "Bolt From The Blue", a top-notch follow-up to the band's smash "They Shoot Horses", more than makes up for it. As a whole, the warm touch of the album can make your day. ****2/3

Definitely well worth a listen, especially if you like 70s rock with modern production. ****/5