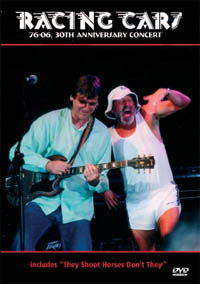 Most people’s introduction to the music of RACING CARS would have come in the spring of 1977 when they had a UK Top 20 Hit Single with ‘They Shoot Horses Don’t They?’ Now over 30 years later they are still releasing critically acclaimed albums and touring heavily in the UK

It is 30 years since Racing Cars unique blend of rock and funk first found favour with the UK’s gig goers and this DVD was filmed at their 30th Anniversary Concert to a packed house at Pontardawe Arts Centre, Wales on 7th July 2006.

Racing Cars have plenty of laps left in them and as this DVD shows they remain one of the great British bands.

Always a great live band, the band packed out this 30th anniversary show and offer a timely reminder of both the strength and weaknesses of a classy live outfit who topped the charts almost in spite of themselves...Complete with crowd and band interviews and a musical prequel from an excellent male voice choir, this is almost as much a celebration of Welshness as the band itself.

This DVD captures their 30th anniversary concert at Pontardawe Arts Centre in July 2006, and it's a document of one of Wales' most underrated rock outfits. The 16 tracks here show a deeply impressive performance, with all five members giving a hometown audience their all.

It preserves their 30th anniversary concert, a 16-song show that meanders through a career that was a lot longer than the chart books let on...