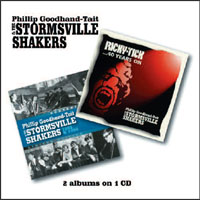 PHILLIP GOODHAND-TAIT enjoyed some considerable commercial success in the late 60’s and the 70’s as both as a songwriter and solo artist.

Phillip wrote a number of the HITS for The LOVE AFFAIR including ‘A Day Without Love’, ‘One Road’ and ‘Bringing On Back The Good Times’. He also had significant solo album success in the 70’s with the albums ‘Oceans Way’ and ‘Teaching An Old Dog New Tricks’ throughout Europe.

In 1965 he fronted the STORMSVILLE SHAKERS and had singles released on the Parlophone label The period 1965 and 66 were a high energy and raw commitment period from the band and the recordings from ’1965 & 1966′ are a fitting memory of that time.

‘Ricky-Tick… 40 years on’ was recorded in 2005 and celebrated in style the anniversary of the formation of The Stormville Shakers with 10 new tracks written by Phillip. Classic Popular Music

This eponymous album compiles all of the band's grand studio recordings and a trio of exuberant live numbers, 14 tracks in all, and twins it with the now reformed band's 2005 studio album, 'Ricky-Tick.

...this collection is the first comprehensive look at a great lost UK club band of the '60s...The first 14 trck on the CD come from the Shakers' mid-60s heyday with the remaining ten tracks coming froma 2005 reunion album...For anyone with even a passing appreciation of Alan Bown, Cliff Bennett or Moon's Train, this Stormsville Shakers collection will not disappoint

All told this is a sumptuous set, and a superb tribute to one of Britain's finest composers.

...high-energy guitar-and-saxes soul and r'n'b sound captured on a series of studio and live pieces...