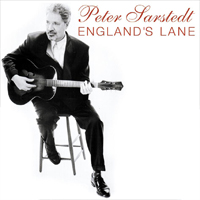 PETER SARSTEDT shot to fame and fortune with the multimillion selling single “Where Do You Go To My Lovely” which reached the number 1 spot in no less than fourteen different countries.

“England’s Lane” was recorded in 1997 with Peter’s childhood friend BRIAN HODGSON (The RUTLES, HOGANS HEROES) who also produced the album.

Peter was joined by his brothers EDEN KANE and CLIVE SARSTEDT on the album track “Altogether Now” which also features ALBERT LEE on guitar. A classic album long out of print now available again.

It's Sarstedt's voice that leads the way, smooth and poignant, a bit like the Canadian singer Gordon Lightfoot. Where Do You Go To My Lovely is not here but there's a similar waltz sound on Biarritz, while Altogether Now is a rocking country tune with Lee's trademark licks. The title track has a bluesy feel, and warms up nicely. As a whole, the album reminds us of Gordon Haskell's gentle Harry's Bar.

After listening to England's Lane it is easy to see why Angel Air decided to bring this album out of the vaults. It is a fine album of folksy rock and pop, very nicely recorded with excellent musicianship and Sarstedt's silky smooth vocals. The title track begins the disc featuring soulful harmonica and bluesy/folky guitar. Other highlights include; the ultra-catchy folk pop gem that is "British Museum", the poignant beautiful folk of "Horses", the Latin tinged acoustic guitar in "You Crazy Fool" and the gorgeous accordion melody in "Biarritz", another tune in the folk tradition.

When I want something a little lighter and poignant in a folkier vein I will certainly reach for England's Lane again. I suggest you do the same.

"England's Lane" is one of the veteran's most solid offerings. Instigated and produced by Brian Hodgson, an original Rutle, it finds Peter reconnecting his past and the present en route from UK to France and across the Pyrenees with the same lyricism and attention to detail he demonstrated on that Number One hit. There would be no Ivor Novello Award for tapping into a similar tune on the accordion-adorned "Biarritz" yet it's difficult not to become fascinated with "The Horses" and its air of freedom.

It's also hard not to recognize Peter's "ancient features" in the "Empty Pages" melodrama, whereas the pictures in "British Museum" come painted with a skank and a smile. And while some nostalgia is inescapable in such a context - an exquisite acoustic weave in "You Crazy Fool" is a dewy-eyed delight - the singer's recollections are mostly sweet, his two brothers - each a charts-denting musicians - joining in for the skiffle-spiced "All Together Now" in which Albert Lee pitches filigree flurries.

At the same time, plaintive harmonica and steel guitar give "I Need Her" and the title track a bluesy tinge, but the unhurried stanzas of "Spanish Made Easy" harbor a genuine passion. So if Sarstedt felt out-of-fashion when delivering "The Last Of The Breed," he certainly wasn't - and isn't now, when Peter's memories faded due to deteriorating health.

Where do you go to when you're down and out? Down your memory lane. 4/5 Stars

Recorded in 1997, England's Lane has long since been out-of-print. But now, nearly twenty years later, it is once again available for all to hear. The album was recorded and produced with Sarstedt's friend Brian Hodgson who many will remember as a member of The Rutles and Hogan's Heroes. Eleven smooth listener-friendly soft pop tunes here with a heavy emphasis on lyrics and vocal melodies. Warm, inviting cuts include "British Museum," "All Together Now," "Castles In Spain," and "The Last of the Breed."

Right from the opening title track the unique vocal could not be mistaken for anybody other than Peter. His phrasing, wit, humour, emotion and ability to paint pictures and take you to places are truly art. Listening to 'Biarritz', 'British Museum', 'Castles in Spain' and the glorious 'Spanish Made Easy' are virtually cinematic experiences. Ray Davies is the only other singer I can think of that masters that ability (Village Preservation Society being a prime example). Peter's wistful warm honey coated voice seeps into your conscience, stays there and makes the world a better place for 45 minutes and these days we could all do with that.

Whether tackling his skiffle roots on 'All Together Now' (with Albert Lee on guitar) or revisiting Marie-Claire on the closing track 'The Last Of The Breed' this remains, for me, one of his finest albums. And as a closing thought get a copy of his debut album which contains the wonderful 'I Am A Cathedral' and the FULL version of WDYGTML which they NEVER play on the radio!

Rampant eclecticism reigned supreme as Peter recaptures the spirit of his late sixties hit with 'Biarritz' before joining forces with his bothers Eden Kane and Clive Sarstedt for an engaging country romp entitled 'All Together Now' featuring the great Albert Lee on guitar.