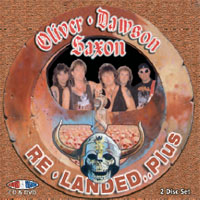 Oliver Dawson Saxon were formed back in late 90′s after former SAXON founder members GRAHAM OLIVER and STEVE DAWSON formed the band and they immediately recorded and released an album called ‘Re landed’ which got a limited release on a local label.

Disc 2 (DVD) is a concert filmed in 2001 with numerous bonus features.

Their excitement is palpable, the crowd enthusiastic, and the songs thoroughly reinvigorated.

Overall, this is not bad and should provide pleasure for those of a certain age

...revel in the pomp and glory...This is a headbangers delight/guitars aplenty and a storming performance from new vocalist John Ward.

...with two founding members and Nigel Durham, a drummer who played on Saxon's Destiny album, this is a classic lineup...and when the whole mix sounds so good who cares who sings them.

Classic NWOBHM from some of the UK's masters