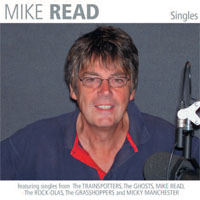 MIKE READ known to most from his BBC Radio days as well as hosting Top Of The Pops and Saturday Superstore has won numerous broadcaster of the year awards, written successful stage musicals, written dozens of books and over the past two decades released numerous singles which feature on this album As well as recording under his own name he also was The TRAINSPOTTERS, MICKY MANCHESTER, ROCK-OLAS, GRASSHOPPERS and The GHOSTS.

John D. Loudermilk was so impressed with Mike’s version of his song “Language Of Love” that he suggested they perform together at Britain’s largest country music festival at Wembley that year.

Mike Read is most famously known for his stint as a Radio One DJ (and he still DJ’s to this day currently on the Big L radio station) and for banning Frankie Goes To Hollywood’s ‘Relax’. He has also written numerous books, appeared on TV and written a stage show that didn’t do too well.

As if this didn’t keep him busy enough during the years he has recorded many singles under his own name and various guises such as the Trainspotters and Rock-olas, which are compiled here (although his top 40 hit of a few years ago as the Jungle Men isn’t on here).

...the DJ's dalliance with rock 'n' roll stretches back to the '60s...one can attribute any of the songs to some other artist...