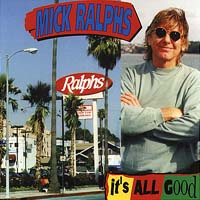 MICK RALPHS is one of British Rock’s most tasteful guitarists. As a founder member of Mott The Hoople and Bad Company, Mick has achieved a level of commercial success that most artists can only dream of.

This is his second solo album for Angel Air, some two years in the making, and featuring an exclusive live track from Bad Company recorded on that band’s 1999 USA “Original” tour, which features – apart from Mick, Simon Kirke (drums) and Boz Burrell (bass).

Mick has played all instruments on all studio tracks and also devised the artwork concept.

…miles better than its predecessor…This is clearly an album by a man enjoying himself once more, enjoying putting down an album's worth of music he loves…this has been well worth the wait … Recommended

…it's his use of catchy hooks, memorable melodies and of course his top notch guitar playing that leaves you with a feeling of enjoyment after listening to this excellent CD…Another future classic from the Angel Air stable, packaged as usual to their usual high standards.

This is nice; in fact this is very nice…The way it has been put together is nothing short of inspirational, I just love it…It's a joy to listen to laid back with a beer; it's the way life should be. There is a passion flowing from the instruments which were all played by Mick (except the Bad Company song) and he even did the artwork for the cover. I have to say this is a sensational instrumental album.

…a fabulously evocative record, the sort of controlled masterpiece of which most guitar heroes ar capable but that few actually get 'round to recording….some of the tracks here rate alongside any of the masterpieces for which he is otherwise justly feted….