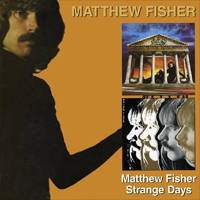 MATTHEW FISHER shot to fame playing the mighty Hammond Organ as a founder member of PROCOL HARUM and co-wrote the most played UK single ever “A Whiter Shade of Pale”.

Matthew started in the music business as a member of Peter Jay & The Jaywalkers before joining Procol Harum in 1967 until he left the band in the autumn of 1969, and was soon producing for other artists (he produced ROBIN TROWER‘s first three albums of which the second, “Bridge Of Sighs”, went platinum in the USA).

While "Running From Your Love" and "Why'd I Have To Fall In Love With You?" marry deep drama to the strings-drenched easy listening, "Miss Suzie" is playful in a Big Pink way, whereas "Looking For Shelter" knocks on Dylan's door with panache and female choir to stress its humorous preaching. On a serious note, "Just How Blind" and "Back In Your Arms Again" are honeyed ballads using Bach for a background, but "Give It A Try" - whose sarcasm rides irresistible riffs and catchy chorus - could have found a faithful following had it been taken to the dancefloor, with Tim Renwick's licks for a glitterball.

Moving on with the times, "Something I Should Have Known" has synthesizers and vocal effects outlining emotional alienation, leaving it to piano to warm the sax-spiced "Living In A Dream" and to drums to propel "Only Yourself To Blame" towards sweet pity. As a result, the joyous "Desperate Measures" would create external contrast and internal paradox, demonstrating Fisher's multi-instrumental talents en route to paradise of "Can't Stop Loving You Now" and "She Makes Me Feel" which might signal Matthew's comeback to erstwhile classicism. It might...if only he didn't abandon music and become a computer programmer.

It would take him another decade and a new stint with his old band to deliver "A Salty Dog Returns" that is possibly the veteran's last-ever offering, because, again, solo career has never been Matthew Fisher's priority, yet his records didn't lose an iota of their delight. ****1/4

The self-titled album from 1980 is a superb album, full of heartfelt ballads. 'Anna', for example, combines the slightly folksy singer-songwriter image with big, bold, and slightly epic arrangements that give you the 'small man on a big stage' feel that would, for example, be so successful for the likes of Andrew Gold. In fact, you could draw comparisons between the two here.

Strange Days (1981) offers more power pop sensibilities with a lush production - and lots of double tracked vocals combined with the more new wave music fashion of the period. A higher energy suite of songs, in fact. This album doesn't quite have the dramatic focus of the earlier album but there is still much to like here with a suite of light and airy songs presented with lots of energy. In mastering terms, there is a touch of compression residing within the mids but the effect is quite subtle so that the effect is used more to emphasise detail than to intrude upon the whole soundstage.

Twofer featuring solo albums Matthew Fisher originally recorded and released in the 1970s. Although still mainly known as one of the founding members of the iconic band Procol Harum, this release will hopefully open up people's eyes and ears to Fisher's entire career. After leaving Procol Harum, Matthew opened a very successful recording studio (Old Barn Recorders) where he worked with many notable artists. This disc presents all the tracks from Fisher's first two solo albums...Fisher was obviously ahead of his time in terms of songwriting and studio know how. Although his self-titled debut was not hugely successful, it did spawn two singles ("Why'd I Have To Fall In Love With You" and "Can't You Feel My Love"). Strange Days veered off the path of straightforward pop in favor of a more stripped down sound. Two songs were co-written by The Zombies' Chris White (who also acted as co-producer on both albums). This reissue will no doubt open the doors for a whole slew of new fans and listeners to experience Matthew's music. In a world of throwaway pop, these tracks stand out because they've stood the test of time...and because they have substance.

Matthew FISHER begins the eighties with an eponymous album that had great success in Greece thanks to the title track "Why'd I Have To Fall In Love With You", considered a classic. He is joined by Dave MATTACKS on drums, a member of FAIRPORT CONVENTION and session man having participated in Gary BROOKER's albums...Tim RENWICK on the guitar, who worked with Al STEWART, THE SUTHERLAND BROTHERS and accompanied PINK FLOYD in 1987 and 1994 as well as during the ephemeral reformation in 2005 for Live8. Mick GRABHAM on rhythm guitar, ex COCHISE and PROCOL HARUM..."Can't You Feel My Love" is the initial piece of the 1980 album and has a superb nostalgic melody, quite far from PROCOL HARUM...

On STRANGE DAYS he surrounded himself with Tim RENWICK on guitar, Peter VAN HOOKE on drums, Ron ASPREY on saxophone, ex BACK DOOR, and Alan JONES on the bass, ex SHADOWS. It starts with "Something I Should Have Known", it has a sound close to ULTRAVOX or Gary NUMAN, rather surprising from the ex PROCOL HARUM member. The sound of synthesizers dominate, the song is perfect, having a very emotional romanticism. The album continues in a more pop vein similar to SUPERTRAMP on "Without You", with a very beautiful vocal performance.

Anyone expecting the gentle prog of Fisher's ex-band will initially, most likely, be a little confused by the grown up pop presented on the earlier of these two releases, a slick smooth sound revealed that wouldn't be out of place in a laid back Eagles setting, or even at the less cheerful end of Paul McCartney's solo output. It's classy stuff that reminds just how strong Fisher's often overlooked vocals are and the overall standard remains high throughout. Opener "Can't You Feel My Love" may be an overly unassuming introduction, but it is a still a cleverly paced and well constructed piece that happily sits on a reserved groove. Things pick up with "Give It A Try"; a more insistent and forceful slice of organ induced pop that, while of its time, possesses more than enough of a classy 70s sheen to have more depth and believability. It also sets the tone for the rest of the album, the strong mix of accessibility and intricately structured melodies carrying "Only A Game" and "Running From Your Love" deep into the memory...

The biggest shock that arrives when track eleven on this disc kicks in - track one of the Strange Days album - is the short period of time between it and its predecessor. From the smooth, yet crafted 70s pop and rock of the previous album, the leap into austere 80s inspired electro shimmers of "Something I Should Know" suggest the passing of decades, rather than mere months..."Living In A Dream" thriving on simple pop hooks and trilling saxophone, while "Desperate Measures" repeats the process in a rockier and harder hitting setting...Strange Days is more a mixed bag than a failure and there's more than enough to keep you sticking with it. However there's no doubt that it's the first ten tracks on this disc from the Matthew Fisher album that will continue to draw you back for more.

Having released two solo albums in the '70s while running his own in demand recording studio, in 1980 he recorded the 'Matthew Fisher' album, then in 1981 'Strange Days'. Both albums are now available on this budget priced CD.

This shadowy figure is best remembered these days for his invaluable contribution on Hammond organ to Procol Harum's 'A Whiter Shade Of Pale,' and the fact that it took several decades of serious litigation before he was finally granted a co-writing credit to this classic 1967 hit in 2009. Fisher's solo career continued on a fairly intermittent basis in the interim, and Angel Air's latest CD re-issue focuses attention on two of his unjustly overlooked offerings from the early eighties. The results veer much closer to mainstream pop than the classically inspired prog-rock of his Procol Harum days, with "Anna" and "Why'd I Have To Fall In Love" emerging as the best of a strangely affecting bunch.