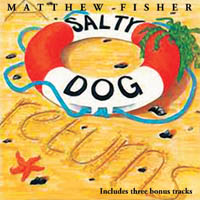 “Whiter Shade Of Pale” is the most played track on British Radio ever.

In 1994 Matthew went into the studio and recorded “A Salty Dog Returns” playing all the instruments on the tracks. Out of print for the past decade this album is much sought after by the Fisher/Procol fans.

...by the time that this album was released in 1994 he'd jettisoned the instrument which had earned him so many critical plaudits to assemble a selection of painfully insipid synthesised instrumentals whose appeal is unlikely to extend beyond the most fanatical of Procol Harum devotees.

Although Matthew Fisher will go down in musical history as one of the founding members of U.K. progressive rock icons Procol Harum, his career as producer, keyboardist and singer-songwriter is equally intriguing.

...One nearly forgotten album that Fisher recorded in 1994, A Salty Dog Returns has finally come out as a CD on Angel Air, Amazingly, the 16 track album is completely instrumental and features Fisher playing everything while covering a wide breadth of instrumental sounds—from Procol inspired rock symphonic edges, to Fisher-esque instrumental covers of Bach played prog-rock style, soundtrack type interludes and there's even a very cool, surf-inspired Shadows tribute track here called "A Tribute To Hank". Who knew Fisher was so adept on both guitars and drums too?

A musical pioneer and trendsetter back during the Summer of Love, Fisher was quite instrumental in helping develop Procol Harum's orchestral rock side—the central fascination being his church-like Hammond B3 organ sound. That side of Fisher, along with a whole lot more can be found on the most welcome rediscovery / reissue of A Salty Dog Returns.

Fine, in depth liner notes by Henry Scott-Irvine written in 2012, fills in the missing pieces behind Matthew Fisher's once, but no longer, long lost instrumental rock masterpiece.

...The master jokes manifest themselves in Fisher's humorous play on the Henry Mancini and John Williams's themes in, respectively, cinematically sleazy "Peter Grump" and the six-string-driven "The Rat Hunter" that connoisseurs may latch onto, whereas PROCOL fans will find a welcome glance back in the transparent flow of "Pilgrimage" with its Celtic motif, and the title track.

But the artist also pays tribute to his previous ensemble in "The Downliners Sect Manifesto", full of pop innocence which contrasts a tasteful suspense of "Sex And Violence". Such a variety keeps this album from becoming a bore even though there's a shade of pale in there... which is clearly a part of its concept and intent. ***1/2

A gentle piece, despite the sometimes dated feel, the album spans a variety of styles that gives it a scrapbook atmosphere. Procol Harum fans will find it intriguing.

The eclecticism of this collection (as well as quotes of Fisher and the casual photos found in the accompanying booklet) leads us to believe these recordings were meant to be demos and sketches rather than a final product. "G-String" and "Linda's Theme" certainly support this...this reissue features three bonus tracks similar to the rest in their breezy, computerized vibe.