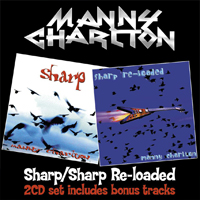 MANNY CHARLTON’S name is synonymous with Scottish rockers NAZARETH as he played a huge part in their worldwide success. His bluesy style of playing as part of the band as well as his being the bands producer for many years. He produced the bands platinum album “Hair Of The Dog” selling over 2 million copies.

Since leaving the band he has released a number of solo albums and “Sharp” was released in 2004 and “Sharp Re-loaded” in 2005 now released by Angel Air as a 2CD set with bonus tracks.

Now living in the USA, Manny is active on the live circuit there.

...the fantastic dry reading of non-bluesy FLEETWOOD MAC's 'The Chain' only goes to show the expanse of Manny's musical reach. Scattered amidst borrowed tunes are Charlton originals including the gentle instrumental ballad 'Burnt Sienna' and the raw riff-fest 'Nearly Fine', the psychedelic blues that is 'In Her Eyes' and the smooth 'Swallow', all of them complementing the selection. Not even by any means, it provides an insight into the ex-NAZ man's creative mind and method...

Both albums are a broad canvas that fit well together, the fade-outs show Charlton could rock all night he has so many ideas. It's lovely to be surprised, it's chuff-worthy to be bowled over. Yep, it hits the mark, one can't resist replaying tracks - cripes, how to get to the end! In short, a blinder.

If there's one thing that simply can't be amiss on the album, then it's Nazareth's bestseller- which is 'Don't Judas Me'. Beautifully executed here, that's all that needs to be said. Hold on, one more thing: also very beautiful guitar-play!

'I Can't Stop The Rain' is one of Manny's own compositions, perfectly demonstrating his skills as a bona fide blues guitarist and composer. Followed by another scorching Manny Charlton number, an instrumental called 'Cold Front'.

'All Along The Watchtower' is simply stunning, sidestepping both the original and Hendrix's seminal version with quasi-reggae tones that cement Charlton's reputation as a truly gifted arranger.

This CD re-issue brings together two albums which first saw the light of day a decade or so ago, highlighting the Spanish born musician's rare prowess as a guitarist...Manny serves up his singular covers of everything from Fleetwood Mac's "The Chain" to Tim Hardin's poignant "Hang On To A Dream"...

This double CD set offers a wealth of credible material by a man who's done it all. Twenty-seven tracks total here. Our favorites include "Muddy Water," "Hang On To A Dream," "Cold Front," "Cinema," "Wicked Messenger," and "Pushin' Daisies."

This edition not only includes "Sharp", but also included here is "Sharp Re-loaded", which came out a year after Sharp 1...Another gem for the collection!

Personally I enjoyed best the covers of non-Nazareth material as I think that says more about Manny's influences which is what I think these releases are all about. To dive down into "the source" of Nazareth...find out where the main songwriter got his inspiration from. From that point of view, it is hard to beat this release. Too many people say "a must for a Nazareth fan" but this release really is. I know I will enjoy it for months and years ahead.

Buy it, you won't be disappointed.